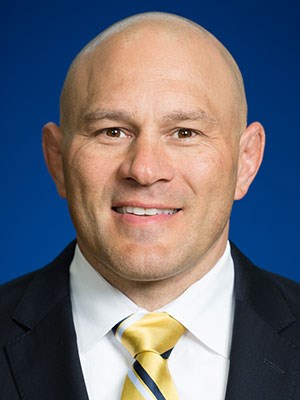 As found on the University of Michigan’s website, below is head coach Sean Bormet’s bio. Read about this coach’s career:

In Bormet’s first season at the helm, the Wolverines posted a 13-1 dual-meet record, including an 8-1 mark in Big Ten duals, to rank fourth in the final NWCA Coaches poll and claimed fifth place at the NCAA Championships behind All-Americans Stevan Micic (133 pounds), Alec Pantaleo (157) and Myles Amine (174). He was named the 2018-19 Amateur Wrestling News Rookie Coach of the Year.

Since returning to his alma mater, Bormet has helped mentor 18 different Wolverine All-Americans, with Michigan earning 23 All-America citations — from 14 different wrestlers — over the last six seasons. He was in Kellen Russell’s corner when Russell captured his second NCAA title and fourth Big Ten title to finish a stellar collegiate career in 2012. The Wolverines have earned top-10 team finishes at each of the last four NCAA Championships, including a fourth-place finish in 2018 and a fifth-place showing in 2019.

A skilled recruiter, Bormet has contributed to six top-10 recruiting classes, including the nation’s consensus No. 1 class in 2013, and will bring another heralded class to Ann Arbor next fall.

Bormet was also named the 2004 USA Wrestling Developmental Coach of the Year for his coaching achievements with age-group wrestlers and programs. He coached the Illinois Junior Freestyle Team to four dual national titles (2006, ’07, ’08, ’10) and two national freestyle titles (2007, ’10). He has coached numerous age-group national champions and All-Americans as a coach for the Illinois Junior and Cadet freestyle national teams.

Prior to founding the Overtime School of Wrestling, Bormet served as an assistant coach at Wisconsin (1995-99) and Michigan (1999-2000). He worked with two-time NCAA champion Donny Pritzlaff and three-time All-American Eric Jetton during his tenure at Wisconsin and All-Americans Otto Olson, Damion Logan and Andy Hrovat while at Michigan.

Bormet posted a 125-21 career record, including a 33-2 mark as a senior, to rank 13th among Michigan’s all-time winningest wrestlers. He accumulated 44 career falls, leading the team with 15 during his junior season and 14 as a senior, to list fourth on the program’s all-time pins list. A two-time team captain, Bormet was twice named the Wolverines’ Cliff Keen Award winner as the team’s most outstanding wrestler.

In addition to his collegiate success, Bormet also excelled in freestyle wrestling, placing second at 76kg at the 1999 U.S. Senior National and third at 74kg in 1996. He took third place at the 1996 Olympic Team Trials and 1999 World Team Trials. While at Michigan, Bormet competed in the 1991 Espoir World Championships after claiming the Espoir national championship at 74kg. He participated in several international tours, claiming gold medals in Italy (1993), Greece (1996), Montreal (1997) and Poland (1998, 2000).

A native of Frankfort, Ill., Bormet graduated from Michigan in 1994 with a degree in sport management. He and his wife, Teri, have a daughter, Zoe, and live in Ann Arbor.”