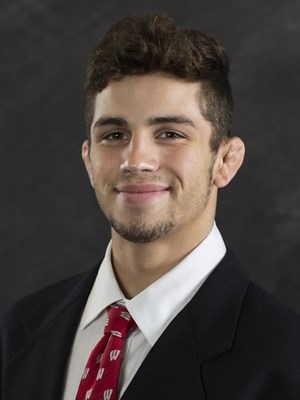 As found on University of Wisconsin’s website, below is Eric Barnett’s bio. Learn about this wrestler’s career:

2019-20: In his first appearance in a Badger singlet, Barnett won the Cougar Clash hosted by SIUE… pinned his first two opponents at the UW Field House and went 6-6 in the Big Ten… finished the regular season with five pins, third most on the team… Barnett had a key fall over Nebraska’s Alex Thomsen, helping the team to the upset over the No.5 Cornhuskers… at his first Big Ten Championship, Barnett took 10th place at 125 pounds for the Badgers

Off the Mat with Eric

Where is your favorite place on campus? Camp Randall

Where is your favorite place to eat on campus? BelAir Cantina

Why did you choose Wisconsin? Coaches, partners, friends and close to home

How did you spend your summer? Training and taking summer classes in Madison

Where is your go-to study spot? Camp Randall

What is your major? Undecided

What are your post-college plans? Pursue world and Olympic teams

Who is your favorite school to wrestle against? Undecided

What is your best wrestling memory? Winning Fargo

Where is your favorite place to wrestle? Madison

When did you begin wrestling? At four years old

What is your favorite thing about Wisconsin wrestling? The family bond

What is something you do before every match? Pray

What is one word that describes this team? Family

My teammates say that I am hyper

What is your most memorable wrestling achievement? Winning WHO’s #1

What is your dream as a collegiate wrestler? Win a team and individual national title

If you would switch places with anyone on the team for a day, who would you pick and why? Trent Hillger because he is a unit

What is your favorite song to sing in the car? Gucci Gang

If you had a completely free day, how would you choose to spend it? Sleeping

If you could have dinner with any three people, dead or alive, who would you choose? Margot Robbie, Donald Trump and Jesus

Who is your favorite athlete in any sport? Tom Brady

What is your favorite sports team? Wisconsin Badgers

What other sports did you play growing up? Cross country, baseball and football”