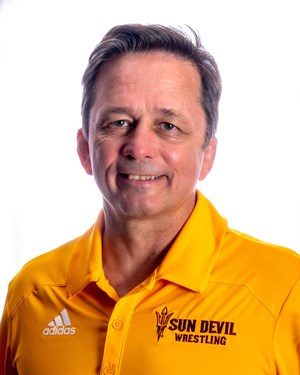 As found on Arizona State University’s website, below is Zeke Jones’s bio. Learn about this coach’s career:

The seventh coach in ASU wrestling history, Zeke Jones was hired in April 2014.

Jones earned his third Pac-12 Coach of the Year honor in four years in 2020 after leading the Sun Devils to it’s highest conference tournament point total (141.5) since 1993 while winning the program’s 19th Pac-10/12 title. He becomes the first ASU wrestling head coach to win the conference award three times since Thom Ortiz did so in 2003, 2005 and 2006.

A member of ASU’s 1988 NCAA Wrestling Championship team, Jones was a three-time All-American and Pac-10 Champion for the Sun Devils. A national runner-up at 118, Jones sits at No. 4 in ASU’s career record book in both overall victories (134) and dual victories (59). He also holds the school record for dual match victories in a season with 22 during the 1989-90 campaign.

As Olympic head coach, Jones’ athletes earned two gold medals and one bronze at the London Games in 2012. His athletes in the 2004 Athens Games, where he was the freestyle coach, earned a gold and two silvers.

Jones came to USA Wrestling after coaching at the University of Pennsylvania from 2005-07, where he amassed a record of 33-17-1. Following the 2006 campaign that saw an NCAA Champion, two All-Americans, two Eastern Intercollegiate Wrestling Association (EIWA) champions, and a third-place finish at the EIWA Championships, Amateur Wrestling News named Jones the Rookie Head Coach of the Year.

Prior to coaching at Penn he served on the coaching staffs at West Virginia, Arizona State, and Bloomsburg University. Jones coached teams that have finished in the NCAA Final Four twice, in the top-10 four times and won six conference team championships. Individually his wrestlers have won six NCAA titles, eight NCAA finalists, 36 individual conference champions, 29 All Americans, 74 NCAA Qualifiers, and 11 wrestlers have competed in the NWCA All Star Meet.

Jones and his wife, Renee, have four children, Jessica, David, Rebecca, and Jacob.