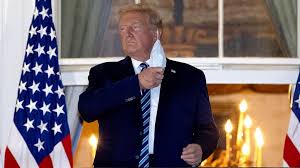 It was just one week ago that Donald Trump first announced via Twitter that he tested positive for COVID-19 and, that same day, was admitted to Walter Reed Hospital. The world watched and prayed (although it should be noted that evil liberals gloated and expressed wishes of harm on him, a truly despicable act). Trump kept everyone updated, tweeting messages and videos on Twitter. He reported continual progress over the next few days.

On Monday, October 5, he strode out of the hospital. The world watched as he exited Walter Reed, looking strong and confident as ever. When he first emerged, he was wearing a face mask. He flew back to Washington in his helicopter and landed on the South Lawn. Every camera possible captured what happened next. In an iconic moment, he crossed the lawn, waved and gave thumbs up several times. He then ascended the steps of a nearby balcony of the White House, took off his mask and stuffed it in his pocket. He turned to face the American people, saluted the military personnel around the helicopter, and headed inside.

Along with this moment was another instance of strength and defeat of COVID  that is so important for people to see right now: earlier in the day, Trump tweeted this: “I will be leaving the great Walter Reed Medical Center today at 6:30 P.M. Feeling really good! Don’t be afraid of Covid. Don’t let it dominate your life. We have developed, under the Trump Administration, some really great drugs & knowledge. I feel better than I did 20 years ago!”

While liberals became absolutely apoplectic over both the mask removal and the tweet, clear-thinking people recognized this as one of the most important messages that President Trump could possibly deliver to America and the world: Don’t be afraid of Covid. Don’t let it dominate your life. These 11 words are truth. The country has been locked down to an unreasonable and harmful extent since March. Fear of COVID-19 has permeated every aspect of human life, from widespread business shutdowns that have virtually destroyed the economy, to school shutdowns that have negatively impacted students at all levels, to families and friends isolating from one another, to absurd mask mandates in thousands of public spaces throughout America. All this rooted in a fear that does not have to be.

COVID-19 is real, and it has affected millions of people. Sadly, over 200,000 have died, and unfortunately, some of these deaths were the result of terrible blunders by state governments, such as putting COVID patients into nursing homes. But the reality has emerged and becomes clearer every day: in the vast majority of cases, it is not deadly. Treatments are getting better and becoming widely available. President Trump, in his true, genuine care for people, has promised to make the treatments that helped him free and available to all who need it. A vaccine is coming much sooner than anyone could have imagined. And for all of the research on this virus that has been in our midst since at least January (and maybe even longer), it is now known to be comparable to the flu. America does not go into lockdown each flu season, and there is no reason to do so. We continue on with daily life and take normal precautions. In other words, we do not let it dominate our lives.

Trump is absolutely correct to tell the American people not to be afraid of COVID and not to let it dominate our lives. Americans cannot, and should not, cower in the face of something this pandemic. We should stand up and face it and work together to defeat it. Trump knows this, and he has demonstrated this better than anyone. We should follow his lead in every manner possible – pulling off our masks, opening businesses and schools, and resuming normal life. And by re-electing President Trump, we can continue to have a leader that stands strong and urges everyone to stand strong. Just what we need right now, and for the next four years.