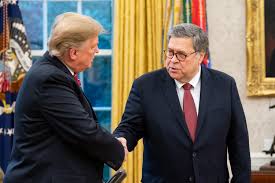 The chief law enforcement officer of the country – U.S. Attorney General William Barr – told Laura Ingraham on Fox News Channel last night that pandemic restrictions must be balanced against civil liberties…Some of the profound quotes issued by Barr and Ingraham, in no particular order (as they all are so compelling), during this interview include:

Barr: “…Whatever steps you take have to be balanced against the civil liberties of the American people and cannot be used as an excuse for broad deprivations of liberty…The states have very broad police powers, that the federal government doesn’t have, to regulate the lives of their citizens, as long as they don’t violate the Constitution. So we’ll be keeping a careful eye on that.”

Ingraham: “At what point in time do Americans feel that they’ll have that right back and that the federal government will stand up if local officials continue this all-out prohibition going forward?”

Barr: “I think religious liberty is the first liberty. It is the foundation of our republic, and a free society depends upon a vibrant religious life among the people. So anytime that’s encroached upon by the government, I’m very concerned.”

Barr: “When this 30-day period ends, I think we have to consider alternate ways of protecting people.”

Ingraham: “These are inalienable rights…There are a lot of Americans today who are mourning those who have lost their lives in this horrible virus, who also say the government doesn’t have the right to take away our rights, even when the experts are saying this is a horrible time for us health-wise, and they’re very worried, I think as time goes on. But they’ve been very patient as well.”

Barr: “I think they have been patient, and I think we have to be very careful to make sure…that the draconian measures that are being adopted are fully justified and that there are not alternative ways of protecting people. And I think…when this period of time…at the end of April expires, I think we have to allow people to adapt more than we have and not just tell people to go home and hide under the bed.”

Ingraham: “…The rule of law still applies during a pandemic. The rule of law…our inalienable rights…the law of the land…it all still exists and we don’t want to set a precedent where every time experts declare a crisis, and it’s scary and a lot of people are going to die, that we just lose our ability to function as a government.”

Americans should take the coronavirus seriously, just the same as they should take seriously all significant strains of the flu and related diseases, as well as deaths from drug overdoses, suicide, and stress-related deaths (all of which have very similar or higher death rates and occurrences than the coronavirus). Politico fearmongers, with a precise purpose or in reckless disregard of facts, however, have sought to frighten Americans into believing that the coronavirus is more dangerous than is actually the case. Now, the strongest and most thoughtful in the political and media worlds are correcting the errors of the evildoers and the hysterical.

President Trump tweeted this afternoon, “A key coronavirus model is now predicting far fewer deaths than the number shown in earlier models.” The president, who has been a pillar of rationale during this crisis, has examined the evidence presented by a plethora of leading medical doctors and scientists – not just the wild opinions of a few – to reach valid conclusions that can lead the nation out of an unnecessary crazed panic. Thoughtful, sound-minded members of the media, like Ingraham, are reporting information that is elsewhere being hidden or distorted.

Also last night, Tucker Carlson reported on his Fox News Channel show that the Institute for Health Metrics and Evaluation (IHME) – a liberal think tank at the University of Washington – now projects that the total number of American deaths from the coronavirus (by the time of its estimated end in August) will be 60,000 people. This is of great significance because this 60,000 figure is the same projected number of American deaths from this season’s flu. Yes, the IHME, who most state governments are relying upon for their crazed society-shutting, draconian orders, has now predicted that the deaths from the coronavirus will be the same number as those from the flu.

Carlson additionally presented statistics showing that the amount of deaths from drug overdoses last year exceeded 60,000. Suicide deaths were near that mark. Several other common reasons for fatalities far exceeded this number.

It is most logical and rational to be gravely troubled by the states’ governments’ desecration of Americans’ civil liberties via unprecedented and unconstitutional drastic government orders in face of the facts that show that the dangers of the coronavirus, albeit serious, are at the same level of those of the flu, drug overdose, and suicide. The states’ actions – in also annihilating the economy, as well as causing a significant number of other deaths from stress, mental health issues, and people refusing to leave their homes to see doctors for other health matters – are inexplicable, as they not only fail scientific scrutiny but they are wholly refuted by math.

MATH cannot be disputed by even the most arrogant and/or fabricating politicos because, well, it’s MATH. The following math further makes the government shutdowns confounding and disturbing:

(1) According to Johns Hopkins University and Worldometers.Info and every other source that can be found, the current number of confirmed cases of the coronavirus in the U.S. is 462,391 with 16,454 people who have sadly died from it. A purported death rate, calculated with those numbers, is approximately 3.5% – pursuant to the mathematical equation of dividing 462,391 by 16,454…Basic math, however, shows that the true death rate is substantially lower.

Per Dr. Meyerowitz-Katz, who cites the website for the Center for Evidence-Based Medicine at Oxford University (the “CEBM”), “the best estimates put COVID-19 infection fatality rate at around 0.5 – 1 percent.” The CEBM, which is no conservative outlet in that it hails from one of the world’s most influential universities, lists the same approximate 3.5% current rate of U.S. fatalities (derived from the mathematical equation of dividing the current number of reported cases by the current number of deaths). The CEBM then goes through the math analysis – of course, taking into account the substantial number of people who had/have the coronavirus (with little symptoms or no symptoms) and have not reported it – and ultimately reaches the conclusion that the actual death rate for the coronavirus, worldwide, is somewhere between 0.5% and 1% (with America being on the lower end). It is incredibly interesting to note that the CEBM, in drawing a comparison between the coronavirus and the swine flu (aka H1N1 influenza), reported, “the overall  case fatality rate as of 16 July 2009  (10 weeks after the first international alert) with pandemic H1N1 influenza varied from 0.1% to 5.1% depending on the country.  The WHO reported that swine flu ended up with a fatality rate of 0.02%.” In other words, the initial death rates estimated for the swine flu (at the same time frame as the U.S. is currently in with the coronavirus) were egregiously higher than what the actual death rate turned out to be.

The reality – via basic math – is simply this: the coronavirus death rate in America is substantially lower than some unscrupulous and/or highly reckless politicos are reporting (in their efforts to cause hysteria, panic, and fear). The actual death rate may be somewhere between 0.1% – 0.5%. It may be less. The truth is that the U.S. coronavirus death rate is commensurate with that of the flu—and the number of deaths that it will sadly cause to Americans will probably be less than the number of Americans who have died from drug overdoses in the same time period.

Although all definitively must abide by the new laws restricting their constitutional rights (just as they must follow any other laws with which they may disagree), they should strongly and loudly voice their opinions in opposition of these civil liberties-destructive/economy-annihilating/communist-style shutdown measures. At the same time, all should take the coronavirus seriously, just the same as they should take seriously the swine flu and all serious strains of the flu. That said, rather than the government forcing Americans into a freedom-less submission, people should be permitted to utilize their own acumen and good sense—and take certain normal precautions. Washing hands, being sanitary, and following the advice of medical experts is clearly the wise path. The very elderly and those with significant pre-existing conditions (and anyone thoughtful) should be wary and judiciously interact with others – through their own choice and judgment. Compelling all of the populous to succumb to dictatorial government strangleholds, however, is not only unwarranted – given the medicine, science and math – but illicit and unconstitutional.