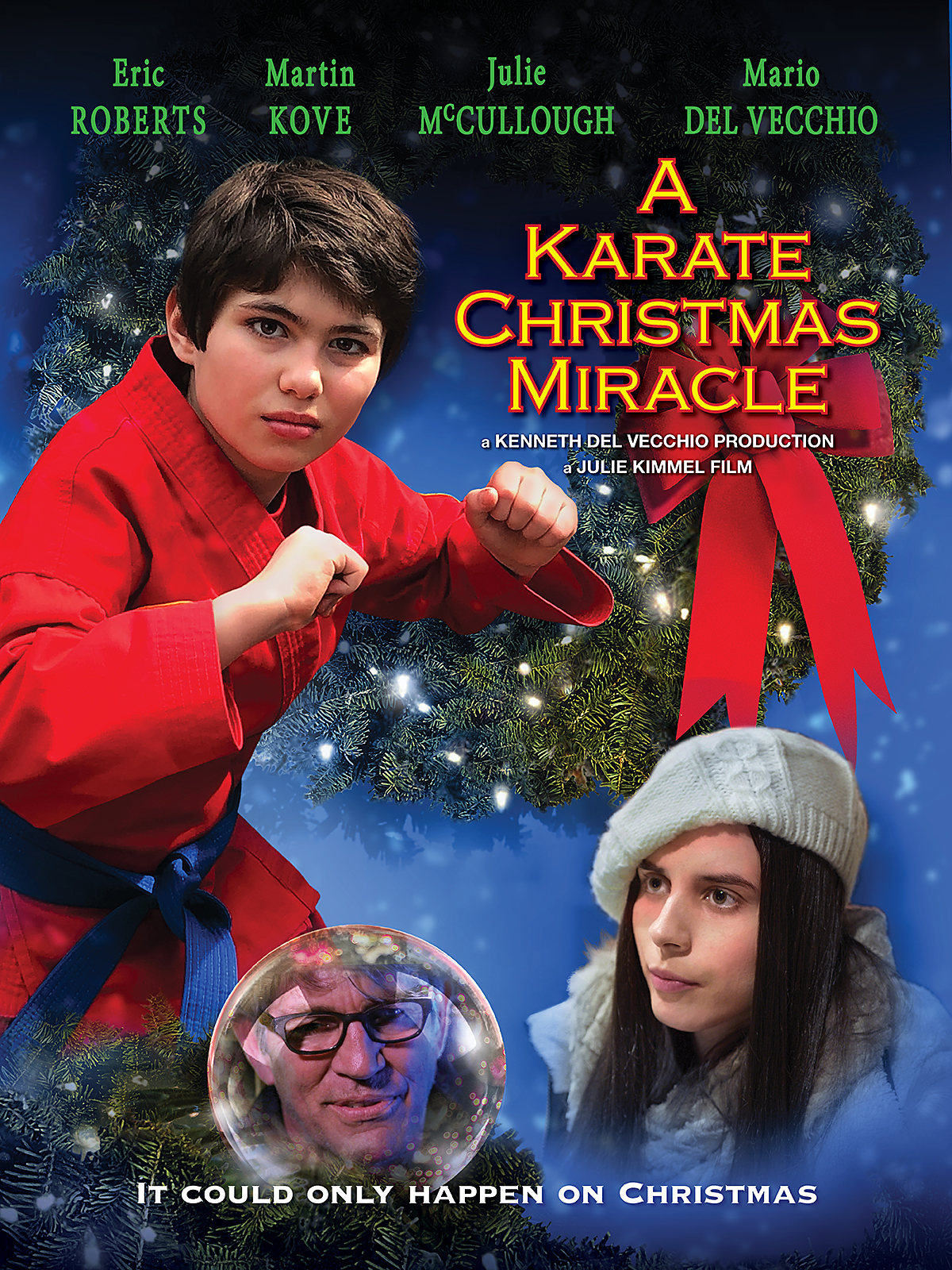 A Christmas Carol. A Christmas Story. It’s a Wonderful Life. Home for the Holidays. All move over. There’s a new sheriff in town, so to speak.

It’s called the little engine that could, in a way.

It’s actually called A Karate Christmas Miracle. It’s a smallish independent film (in budget), but big in heart, mystery, and uplifting passion. This new Christmas story gem, released by KDMG on November 15, has hit the top three in holiday movies. That’s in the newest of holiday movies. While it’s not necessarily being watched more than, let’s say, It’s a Wonderful Life, it is being viewed more than about 250 newly released Christmas and other holiday movies. That’s quite a feat for a film whose lead is an 11-year-old boy (10 when the movie was shot last year).

Okay, A Karate Christmas Miracle isn’t without its star power names. It’s not one of those indie wonders that arises from the dust without any known actors. Very poignantly – karate-poignantly – A Karate Christmas Miracle features karate movie icon Martin Kove (“Cobra Kai”, The Karate Kid films) in a well-played, noticeable supporting role. This was great casting by the producers, given Kove’s currently minted reprised superstar status, in playing “Cobra Kai’s” villainous John Kreese – the same character that immortalized him through The Karate Kid franchise movies. YouTube’s blast-out series, “Cobra Kai” has only been outdone by “Game of Thrones” in this past year’s ratings, and the Kreese character was the central focus of this season’s show. So, perhaps some of this mega-karate show fanfare, a la Kove, rubbed off onto A Karate Christmas Miracle.

The film also stars Academy Award nominee Eric Roberts. Maybe somewhat of a journeyman at this point in his career, Roberts also has iconic fight movie credentials; he’s unforgettable in a lead role in Best of the Best. His Hollywood pedigree, in total, goes a long way, with memorable portrayals in critically acclaimed films, such as The Pope of Greenwich Village, Star 80, and Runaway Train. In A Karate Christmas Miracle, Roberts is a frequently appearing villain, whose eerie performance helps drive what is an ultimately very uplifting holiday flick.

One film lead is also a recognizable face: Julie McCullough of “Growing Pains” and Sharknado fame. McCullough’s quirky, yet smart performance as a law professor (who formerly was a psychic), coupled with the two other lead performances from relative newcomers Mila Milosevic and Mario Del Vecchio, serve as the powerful motor for this little engine that could – and has.

Jesse Genesis (Mario Del Vecchio), a driven, cool 10-year-old hasn’t seen his father in almost a year. His dad went missing on Christmas Day the previous year, presumably kidnapped at a mass theater shooting presided over by Eric Roberts’s character. Jesse’s mother, Abby, played by girl-next-door pretty Mila Milosevic, is past believing that her husband will return. Jesse, never giving up on that his dad is still alive, provides Abby with a glimmer of hope.

The 10-year-old has self-imposed a 12 Days of Christmas List – that he must accomplish. Name all the state capitals. Fire off all the presidents in order. Do 100 push-ups…And earn a karate black belt. That is, earn a black belt in the 12 days before Christmas, an impossible task that would take a miracle…

Jesse, through a series of visions, believes that if he can teach himself to become a black belt in this very short time period, then his father will return home on Christmas Day. Although Abby, a workaholic mother who pushes away her personal woes through a high-level advertising job, doesn’t initially believe in her son’s quest, she seeks the aid of a psychic (McCullough) who she had once visited as a teenager. This psychic – now a law professor – had strangely predicted the disappearance of Abby’s future husband in that long-ago meeting. The movie’s marketing description appropriately describes what follows in this pleasing holiday flick:

A  roller coaster thriller ensues, where the trio unravel a mystery that no one expected. And maybe, just maybe, witness the delivery of a miracle that can only happen on Christmas.

The ending may not be what one expects, but it is powerful, with a lead-up that delivers twist after twist. Written/produced by best-selling author and veteran filmmaker Kenneth Del Vecchio, A Karate Christmas Miracle, is a seamlessly written, tight film that equally brings out emotions of love, empathy, strength, and laughter. It’s a quick-moving mystery that has just enough karate in it to warrant its title. And it’s a tear-jerker that, most of all, is uplifting in a way that the best holiday movies are, sending a message of faith that is awesome yet not preachy. First-time helmer Julie Kimmel nicely directed a film that has all the right story points, and all the right elements pieced together by its crafty indie producer Kenneth Del Vecchio, whose best choice was the casting of his son, Mario.

The child lead did have some great help along the way. Milosevic hit all the right moves, threading the fine line of a cool, slightly distant mother who, underneath it all, is a loving parent. Milosevic was a steady rock in both her character and acting approach. Working hand-in-hand with both Del Vecchio and McCullough (who delivers some fine comedic relief throughout the film) Milosevic leads the way in unraveling a rather exciting mystery. A well-rounded cast with no indie flubs, other notable performances were delivered by supporting actors Buddy Fitzpatrick, Candy Fox, and Joe Wooley.

In the end, do Jesse and Abby Genesis get what they want for Christmas? Sorry, no spoilers here. But the audience sure will get a nice Xmas present in A Karate Christmas Miracle. The film, now being watched en masse, can be viewed right in the home on VOD, for those who have Spectrum (formerly Time Warner), Cox, and Charter as their cable systems. It’s also available for streaming on Amazon Prime Video and multiple other steaming platforms. And it can be purchased on BluRay and DVD from all the major retailers, such as BestBuy.com, Walmart.com, and BarnesandNoble.com. See trailer here.