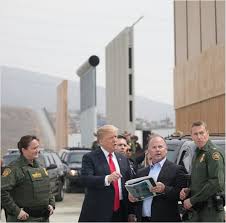 “Around Dec. 2020, the total amount of money we will have put in the ground in the last couple of years will be about 450 miles. That’s probably about $8 billion, in total about 33 projects.”

That was Lt. Gen. Todd T. Semonite, Chief of Engineers and Commanding General of the U.S. Army Corps of Engineers, giving President Donald Trump a report at Calexico, Calif. on how much new wall would be constructed by the end of 2020.

Semonite broke down the figures: That’s 82 miles as of right now mainly from renovating existing fencing, another 97 miles by the end of this year, and then another 277 miles the year after that. That includes the new 30-foot steel slats.

That’s actually pretty impressive given what a hard time President Trump had the first two years working with Congress, which itself was not unsubstantial, but simply not enough to get the job done. Plus getting it approved was like pulling teeth. That funding included $1.6 billion from 2018 for replacing existing fencing with new steel barriers and $1.375 billion in 2019 for more steel barriers that came after the partial government shutdown earlier this year. In addition, with the President’s national emergency declaration, which withstood a Congressional Democrat attempt to overturn, according to the White House, freed up $6.7 billion including, “[a]bout $601 million from the Treasury Forfeiture Fund… Up to $2.5 billion under the Department of Defense funds transferred for Support for Counterdrug Activities (Title 10 United States Code, section 284)… [and u]p to $3.6 billion reallocated from Department of Defense military construction projects under the President’s declaration of a national emergency (Title 10 United States Code, section 2808)…”

And it could not be going up a moment too soon, with apprehensions on the border trending upward potentially to 100,000 in March, the highest in a decade, plus tens of thousands of ounces of heroin, tens of thousands of pounds of cocaine and millions of pounds of marijuana continuing to pour over the border. And that’s just what the Border Patrol seizes. The real number is much greater than that.

It’s really an exercise of leadership. Think President Trump was looking for a bump in the polls by declaring the national emergency? Think again. On its own, declaring the emergency fared poorly in some of the polls that were taken in the aftermath, with majorities opposed. But Trump did it anyway because he thought it was the right thing to do to keep America safe.

That is, if federal courts will allow him enforce the law. Trump’s emergency declaration and fiscal reprogramming of military construction funds are now making the rounds before judges and probably ultimately the Supreme Court.

Somebody has to start taking border security seriously and so far that is President Trump. It’s about time.