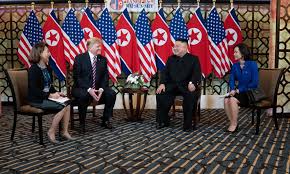 Telling the world that “sometimes you have to walk,” President Donald Trump on Feb. 28 walked away from the Hanoi Summit with North Korean leader Kim Jong Un, citing an insufficient agreement on the part of North Korea to fully disarm its nuclear arms and capabilities.

It was the right call. President Trump deserves all the credit in the world for attempting to bring an end to the Korean War after almost 66 years, denuclearizing the peninsula and for encouraging North Korea to join the global economy. There haven’t been any nuclear tests or rocket launches for many months that, if nothing else, have made the endeavor worthwhile and dialogue possible when in 2017 it looked like war might be possible.

Doing so protects American interests and national security, as well as the interests and security of North Korea’s neighbors and U.S. allies, South Korea, Japan and Australia. It also advances the interests of the other nations in the region including Vietnam that wish to avoid war.

It doesn’t mean that the talks are necessarily over, as Trump and Secretary of State Mike Pompeo pledged to continuing working with their counterparts.

But North Korea’s demand that the sanctions come down without achieving full denuclearization had to be a non-starter. Trump was right to walk away from what would have been a bad deal.

As Trump explained at his press conference in Hanoi, “Basically, they wanted the sanctions lifted in their entirety, and we couldn’t do that.  They were willing to denuke a large portion of the areas that we wanted, but we couldn’t give up all of the sanctions for that. So we continue to work, and we’ll see.  But we had to walk away from that particular suggestion.  We had to walk away from that.”

Going back to the commitments that were made in 2018 at the Singapore Summit, the agreed-upon framework stated, “President Trump committed to provide security guarantees to the DPRK, and Chairman Kim Jong Un reaffirmed his firm and unwavering commitment to complete denuclearization of the Korean Peninsula.”

So, North Korea already has its security guarantee. In return it had agreed to commit to complete denuclearization. The next step was to open up the country and begin disarming, and as progress was made, the sanctions could be lowered. But not beforehand.

But as Trump noted, “[Kim] has a certain vision and it’s not exactly our vision, but it’s a lot closer than it was a year ago.  And I think, you know, eventually we’ll get there. But for this particular visit, we decided that we had to walk, and we’ll see what happens.”

So, they still need to come to an agreement about what “complete denuclearization” is, but in the meantime that does not mean all the progress made to date is lost.

The security guarantee made sense and continues to make sense, as it signals to Kim that President Trump meant business and would be a man of his word — and leaves open the possibility that the process can continue. The North Koreans need only consider the examples Iraq, Libya and Ukraine where disarmament of major weapons programs led to leaving each country vulnerable and open to being destabilized and even leading to civil war. Disarmament programs in recent history have not necessarily led to peace and security.

So, it’s a heavy lift diplomatically for President Trump and the State Department to outline an alternative where Kim and his government have a future post-disarmament. It’s not an easy task. Which is why Trump is right not to rush it. He’s doing the right thing. It’s better to get it done correctly than to get it done fast.

At the same time, Trump and Pompeo have to be wary that Kim is not just trying to run out the clock on the Trump administration. And they must also consider the ongoing trade talks with China as Beijing sponsors Kim and North Korea and is its top trading partner.

It could be that North Korea represents nuclear blackmail in China’s bid for global dominance in trade. Meaning, it may not be possible for North Korea to be settled while trade with China is still an open question. President Trump recently postponed increasing tariffs against Chinese goods. It may be that to exert pressure on North Korea to come to terms, the U.S. needs to get tougher in its trade posture with China to achieve a resolution throughout the region. Stay tuned.