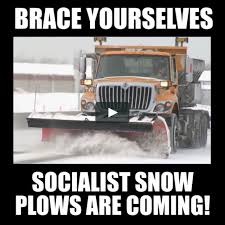 Everyone is talking about the Green New Deal, and how it would end domestic airline travel, the internal combustion engine, fossil fuel usage, most electricity generation and even ban cow flatulence.

You have groups guessing what the cost of the Green New Deal would be in terms of dollars on an annual basis coming up with figures in the trillions of dollars.

To everyone seeking to normalize this Green New Deal, please just shut up.

The Green New Deal is the baring of teeth by the new American communist.  A new breed unleashed that we have seen to the streets attacking people attending Trump rallies, screaming at teenagers wearing Make America Great Again hats, shouting down and rioting against conservative speakers on college campuses.

Here is the truth.  Socialism and communism are evil.

Putting a shroud of legitimacy and normalcy to the destruction of the American ideal is being a Menshevik in a Bolshevik Revolution, you cannot moderate the blood lust of those who seek to enslave you by trying to come up with common ground or discuss alternatives to meet their needs.  The revolution demands immediate payment.

So, let’s stop talking about the symptoms which the New Green Deal represents and actually begin to dissect the disease that is collectivism.

First definitionally the only difference between socialism and communism is if you voluntarily surrender your freedom and wealth or have it confiscated.  Either alternative ultimately comes from the coercive power of the gun and are based upon the premise that those who have attained wealth used ill-gotten means to get it.  As a result, they have no moral authority to keep it from those from whom it presumably was stolen.

In socialism and communism, individual rights are not derived from God and guaranteed by the Constitution, instead everything you have and can expect comes from the good will of the government. It is no mistake that John Lennon’s socialist anthem, “Imagine” starts with the following words:

“Imagine there’s no heaven,
“It’s easy if you try.
“No hell below us,
“Above us, only sky.
“Imagine all the people living for today.”

In order to achieve a kingdom ruled by man unfettered by morality or rules, you have to nix a sovereign God from the equation.  If there is no God, then all rights are nothing more than those that the government chooses to allow you to have, and the only protections that exist are those which they grant.  The only question is who gets to be the one holding the keys over everyone else’s life.

For the other “Imagine” songwriter, Yoko Ono, the dream continues as a lyrical assault on nations, religion, and possessions ending with the following two verses:

“Imagine no possessions,
“I wonder if you can.
“No need for greed or hunger,
“A brotherhood of man.

“Imagine all the people,
“Sharing all the world.”

“You may say that I’m a dreamer,
“But I’m not the only one.
“I hope someday you’ll join us,
“And the world will live as one.”

It makes one wonder if Ono has given up 100 percent of her songwriter royalties to the song to the government as a show of solidarity for the dream.

And here is what they don’t say, in order for the world to “live as one” with no possessions, someone is going to have to take all the stuff and hold it collectively for the common good.

Socialism and communism are a recipe for scarcity as those who choose to not work are entitled to the same rewards as those who choose to work.  Soon, the numbers of those inspired to bust their backs plowing a field are few and far between and the state has to compel people to do necessary tasks all for the good of the common man. The result is effectively slavery, where the worker receives nothing more than the roof over their head, the clothing on their back and enough food to fuel his or her next day’s work.

Medical, architecture and engineering schools are empty as those who would have been STEM professionals choose less rigorous pursuits or no pursuit at all.  Medicines become scarce because there is no one to invent or manufacture them because there is no reward for finding the disease curing needle in the haystack.

You may say that I’m a dreamer, but to me socialism and communism are a nightmare of hopeless poverty as the masses serve their overseers under threat of the whip or worse.

When contrasted with the overwhelming wealth that capitalism has spread throughout the world. The rebellion here in America is particularly ironic as anyone who wishes to have a job can find one.  A place where politics is accessible and a seat in Congress can even be won by a bartender with social media savvy. A place where energy is abundant, inflation is low, wages are up and renewed hope is stirring.

The collectivists will never understand that capitalism works because it isn’t driven by macro-decisions from Washington, D.C. as much as it is by a series of millions of individual decisions in the market place. When politicians take their thumbs off the scales, those individual decisions are likely to be rational ones based upon the needs of each person, and this leads to an overall market place that picks winners and losers based upon merit as opposed to political favor.

Ultimately, capitalism is the individuals freedom of choice to not only buy pizza or a hamburger, but a choice of dozen or more different competing pizzas.  Each pizza maker vying for customers based upon a balance of price, convenience, quality, taste and sales panache.

And in the end, not everyone has to eat pepperoni, but instead there are choices upon choices.  These choices are not because someone in government demanded pizza choice, but instead because the market demanded it.

Over the months ahead, Americans for Limited Government will be exploring the subject of why capitalism works, and why individual rights matter in order to help meet the challenges of the 21st century.  I hope that you will join us on this exploration as we seek to educate those who are naïve to the evils of socialism and communism. Imagine the counter-cultural revolution that the truth can unleash.