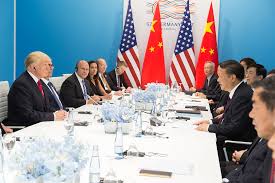 The 90-day extension, according to White House Press Secretary Sarah Sanders, is to allow the U.S. and China to hammer out a more specific agreement.

In the meantime, per Sanders, “China will agree to purchase a not yet agreed upon, but very substantial, amount of agricultural, energy, industrial, and other product from the United States to reduce the trade imbalance between our two countries. China has agreed to start purchasing agricultural product from our farmers immediately.”

Much remains to be worked out, according to Sanders who said, “President Trump and President Xi have agreed to immediately begin negotiations on structural changes with respect to forced technology transfer, intellectual property protection, non-tariff barriers, cyber intrusions and cyber theft, services and agriculture. Both parties agree that they will endeavor to have this transaction completed within the next 90 days.”

And, if it doesn’t work out, then Trump will follow through on the additional tariff threat. Sanders stated, “If at the end of this period of time, the parties are unable to reach an agreement, the 10 percent tariffs will be raised to 25 percent.”

The U.S.-China trade deficit is set to reach another all-time high in 2018, with the difference between goods imports and exports already $27 billion greater through September than this time last year with the fourth quarter still yet to report, according to U.S. Census data, even with the tariffs in place. Last year the goods trade deficit hit $375 billion.

Trump promised to address the trade relationship with China and so a new trade agreement could prove to be an historic opportunity for a more fair and reciprocal approach to be achieved.

Here, Trump is holding onto his leverage to get a deal with China done. Either, China opens up on trade or the tariffs escalate. Here, U.S.-China relations are now at a crossroads, but Trump has demonstrated he is willing to take a risk in order to get a trade deal done — his way. The President has calculated that without the pressure and tariff threat, China would never come to the table.

A deal that, by his critics’ measure, should have been impossible and now, it might actually happen.

A similar tactic was successfully utilized by President Trump to get Mexico and Canada to agree to the new U.S.-Mexico-Canada Agreement (USMCA) trade deal. Trump threatened to leave NAFTA completely if a deal were not reached and now there is an agreement that deals with intellectual property, U.S. agriculture exports, sets a new standard on currency and exchange rates and even got Mexico to agree to labor concessions including a minimum wage.

Now, to get the USMCA though Congress, Trump is formally leaving NAFTA, giving Congress a take it or leave it option. On his way home from the G20 meeting in Argentina Trump said, “I will be formally terminating NAFTA shortly… We get rid of NAFTA. It’s been a disaster for the United States. It’s caused us tremendous amounts of unemployment and loss and company loss and everything else.”

So, it’s Trump’s way or the high way. Either way, the U.S. wins in his eyes. Either China agrees to a new deal on allowing U.S. to import more products to China, reducing the trade deficit, or the tariffs go up. And, either Congress approves the USMCA, or Trump does what he wanted to do all along, which is to leave NAFTA.

It’s a gamble, for sure, but it could be one that pays off for President Trump and the U.S. So far, he’s moving in the right direction, which is what his supporters were asking for.

After all, at the end of the day, Trump will be judged by how these new agreements impact the flow of capital out of the U.S. over the long term. Trump wants to bring production back to the U.S. and export more to bring growth back to the U.S. To get there, the trade deals he is pursuing must move the needle. Something for China to consider. If the trade deficit doesn’t narrow, Trump is likely to pursue the tariffs, which will hurt China a lot more than they hurt the U.S. The current pause in tariff escalation by Trump could be seen as a chance to head off disaster by Beijing.

But if China does not follow through and open up on trade, then the tariffs go up. If Congress doesn’t pass the USMCA, the U.S. leaves NAFTA. That is President Trump’s art of the deal, which is that he is willing to deal — and he is willing to use his leverage. Don’t test him. He’s not bluffing.