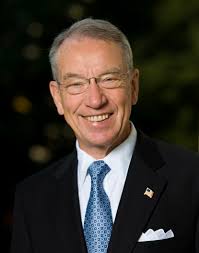 Americans for Limited Government has presented Iowa Sen. Chuck Grassley (R-Iowa) with the annual Senator of the Year award for his “extraordinary courage in defense of liberty.”

It was Grassley’s determination in exposing abuse by the FBI in obtaining Foreign Intelligence Surveillance Act (FISA) warrants against the Trump campaign in 2016, confirming judges and holding the line on Justice Brett Kavanaugh, Americans for Limited Government President Rick Manning declared, that merited the award.

Manning said, “Senator Grassley earned this award by leading some of the most important fights for freedom over the last year as Senate Judiciary Committee Chairman. Starting with his Jan. 2018 memo exposing FISA abuse and referring Christopher Steele for criminal charges for lying to the FBI, Grassley was instrumental in shedding light on how false information was used to obtain FISA warrants against the Trump campaign in 2016  and is now continuing to be used to obstruct the Trump agenda and undermine his entire presidency today. Senator Grassley has also led the confirmations of 84 conservative judges to positions on courts across the country. Two of these being Justice Neil Gorsuch and Justice Brett Kavanaugh to the Supreme Court.”

Manning added in conclusion, “In the face of unprecedented Democratic obstruction, Grassley showed courage as he never backed down in his defense of the Constitutional presumption of innocence.  Americans for Limited Government is proud to name Senator Chuck Grassley our 2018 Senator of the Year.”

The Jan. 2018 memo from Grassley coupled with his and fellow committeeman Sen. Lindsay Graham’s (R-S.C.) determination to get to the truth set the tempo for other disclosures later in the year from the House Intelligence Committee and via a Freedom of Information Act request from Judicial Watch that revealed the Carter Page FISA warrant, pointing to massive abuse of the FISA system.

On judges, dating back to 1952, presidents have about 162 judges per term confirmed by the U.S. Senate. Midway through President Donald Trump’s term of office, with 84 judges including two Supreme Court justices and counting confirmed, Grassley and Senate Republicans are right on track to keeping to historical norms.

During the hearings for Judge Brett Kavanaugh, Grassley held the line and provided an opportunity for Dr. Christine Blasey Ford to testify, allowing questions to be asked in a consistent and comprehensive manner. Grassley heard the concerns of his fellow committee members and accommodated those concerns. If he had not done so, it seems doubtful Kavanaugh would have been confirmed. Amid a dire situation, Grassley kept his cool and got Kavanaugh across the finish line.

And with the Republican majority in the Senate preserved in the 2018 midterms, Trump should be well-positioned to get even more judges through, thanks to the stage that Grassley set. Grassley has since announced that he is moving on from the Judiciary Committee and is headed to the Finance Committee to be Chairman as well as taking up the Senate President Pro Tempore role. His will certainly be a shining example and a tough act to follow.

Sen. Chuck Grassley accepted the award, saying, “Having observed that an all-powerful government is a threat to liberty, our Founding Fathers established a government that was intentionally limited and focused on preserving individual rights. I want to thank Americans for Limited Government for this recognition. Fulfilling my constitutional role of holding government accountable and putting forward solutions that will allow Iowans and all Americans to live free and prosperous lives is the priority that has guided my work as a legislator. It’s an honor to represent the people of Iowa. I look forward to continuing to serve Iowans and all Americans.”