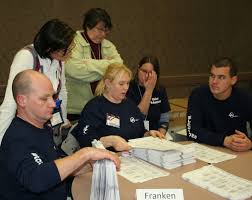 All eyes have been on Broward County, Florida for the past week. The extremely close election totals in the Senate race between Republican Rick Scott (currently Florida’s governor) and Democrat Bill Nelson (the incumbent) necessitated a statewide recount.  The results of all three races—Senate, Governor, and State Agricultural Commissioner—were ordered to be recounted via the voting machines.

While nearly all of Florida’s counties completed their machine recounts in a timely manner and uploaded their revised results to the state website by the deadline of 3:00 p.m. on Thursday, Broward County was fashionably late—by two minutes. The Republicans who were declared the victors on Election Night appear to still be the victors after today’s recount. However, the late reporting voids the machine recount totals and necessitates a manual recount. Could this have been prevented? Was the late submitting intentional? Sore losers, perhaps? (Broward County is heavily Democrat).

During this machine recount period, allegations of corruption and protests have erupted, mostly aimed at Broward County Supervisor of Elections Brenda Snipes. Known for some sketchy handling of election results in the past (for instance, a judge found that she destroyed ballots in the 2016 election), Snipes’s oversight of the recount was disorganized from the start. Absentee and vote-by-mail ballots that were damaged or unclear had to be deciphered by election staff, and on several occasions ballots appeared out of nowhere (such as a box that somehow was discovered at Fort Lauderdale airport). Issues with the machines prevented the Broward County staff from starting the recount immediately after it was ordered. Protestors have remained outside the Broward recount headquarters for nearly a week, bearing signs with messages such as “Lock Her Up” and “Count Every Vote.” Given the apparent mismanagement of the machine recount, many believe that Broward County’s late reporting was due to either complete incompetence or as an intentional act to void the updated results.

Now, a manual recount is necessary, with a deadline of Sunday, November 18. If the manually recounted totals are submitted on time, these results will prevail. If not, the results will default to the what was reported on Election Night, according to Florida law.

It should be noted that Palm Beach County and Hillsborough County failed to upload results at all for the November 15 deadline. And there are several lawsuits in progress, so rulings could come at any time and affect the process as it is underway. The wild ride of Florida elections continues…