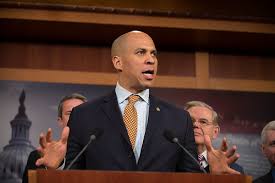 Thanks to New Jersey Governor Phil Murphy, Spartacus, er—Cory Booker, is now legally able to run for both Senate and President in the 2020 election.

The new state law, dubbed “Cory’s Law” for its likely first taker, allows any sitting U.S. Senator or House of Representatives member to pursue both re-election to Congress and a presidential (or vice presidential) nomination in the same election year. Murphy signed this bill into law on Thursday, November 1. While dual office-seeking had not been specifically prohibited by law prior to this, state statute was unclear on the issue. The new legislation, in part, reads “No provision of [state election law], or of any other law, rule, or regulation shall be interpreted as to prevent a person from accepting a nomination by petition” to run for President and Congress simultaneously. The legal language was crafted to prevent court battles that could get in the way of Booker’s race to both Capitol Hill and the White House.

To that end, Spartacus has already visited Iowa and New Hampshire in attempts to gather support for a potential 2020 run. A longtime liberal media darling, he has been touted as one of the frontrunners for the Democrat nomination in 2020. Should he fail to gain the presidential nomination, he can always fall back on being a senator or even the vice presidential nominee.

Republicans who opposed the law pointed out that in 2015 the Democrats attempted to pass legislation that would forbid a current office holder to seek the presidential nomination. Those were different times, of course, as Republican Chris Christie was governor and pursuing the presidential nomination. Had the bill passed, which it did not, and Christie had won the nomination, which he did not, he would have had to resign as governor. But now, with Booker charging toward the presidency, the Democrats have changed their position. Republican state Chairman Doug Steinhardt noted that the Democrats’ rush to pass this legislation in an effort to help Booker shows “the depths of their duplicity.”

And Republican State Senator Gerald Cardinale (R – Bergen) criticized Booker’s inability to decide which office he wants to hold. “Spartacus had the courage to make decisions,” Cardinale stated. “He ain’t no Spartacus.”