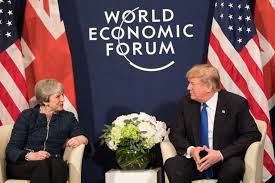 While President Donald Trump continues to bring the pressure to China, so far with 10 percent tariffs on $200 billion of Chinese goods shipped to the U.S., rising to 25 percent in Jan. 2019, which comes atop another 25 percent tariff on $50 billion of goods from China, he is dialing up new trade deals with traditional U.S. allies.

Trade agreements with South Korea, Mexico and Canada are already going to Congress, accounting for a combined $1.4 trillion in trade with the U.S.

And now, Trump has notified Congress of his intent to negotiate deals with the UK, Europe and Japan, with whom the U.S. carried on a combined $1.7 trillion in trade.

These were supposed to be mutually exclusive things, according to all the experts. Trump could either put up more trade barriers or lower them, but he could not do both. Instead, Trump is proving that the U.S. can walk and chew gum at the same time as it pursues the Trump trade agenda.

If nations act fairly and reciprocally with the U.S. to lower trade barriers, they can get a good deal. If not, like China, then they face tariffs.

“Under President Trump’s leadership, we will continue to expand U.S. trade and investment by negotiating trade agreements with Japan, the EU and the United Kingdom,” said U.S. Trade Representative Robert Lighthizer in a statement.

“Today’s announcement is an important milestone in that process. We are committed to concluding these negotiations with timely and substantive results for American workers, farmers, ranchers, and businesses,” Lighthizer added.

It’s the ultimate carrot and stick. By acting tough, and levying across the board tariffs, Trump gave the U.S. room to negotiate and incentive for other countries wishing to export to the U.S. to close a deal.

As for China, for now they get to feel the pain. China has retaliated with tariffs on $60 billion of goods including agricultural products soybeans and pork. On currency, China has devalued the yuan almost 10 percent since February.

Trump has warned that if China retaliates, another $267 billion of tariffs could be in the offing.

Speaking on CBS’ 60 Minutes on Oct. 15, Trump said he “might” do more tariffs on China but held out hope they might want to do a deal, too.

“I have a great chemistry also with President Xi of China. I don’t know that that’s necessarily going to continue. I told President Xi we cannot continue to have China take $500 billion a year out of the United States in the form of trade and others things.”

As for the prospect of retaliation, Trump dared China to intervene, stating bluntly, “They can retaliate, but they can’t — they don’t have enough ammunition to retaliate. We do $100 billion [in trade] with them. They do $531 billion with us.”

In other words, China could rapidly run out of bullets to fight a trade war with the U.S.

So, no deal yet. In the meantime, Congress will have a multitude of trade agreements with South Korea, Mexico, Canada, the UK, Europe and Japan to consider later this year and in 2019 that promise to lower trade barriers for U.S. exporters and get a better deal for American workers.

China will just have sit back and watch. If it wants a good deal, too, then it’s time to talk about currency, intellectual property, dumping and other trade barriers that it has put up. No more free lunches.