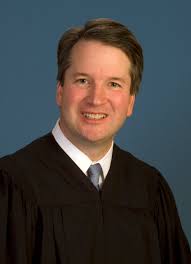 On Monday, Brett Kavanaugh had his first day in the job at the U.S. Supreme Court. He received a friendly welcome from the eight justices who serve as his colleagues. John Roberts, the court’s chief justice, inspirationally greeted him with words of encouragement that bestowed upon Kavanaugh a wish for the new justice to enjoy his many years on the bench to come. Elena Kagan, a liberal Democrat and former dean of Harvard Law school, cheerily chatted with the court’s newbie while he sat directly to the right of her. Kagan notably had hired Kavanaugh as a Harvard Law professor.

Kavanaugh’s first day as a U.S. Supreme Court justice was unremarkable, at least in the courtroom. While hearing a criminal case that involved a stiffer sentence of incarceration than normally would have been delivered (the defendant was given additional prison time because of a prior violent offense), Kavanaugh began peppering both sides with questions about 20 minutes into the oral argument. His judicial conduct was identical to most others who have sat this highest bench in that he didn’t appear to take a side in his questioning. One obvious distinction: Kavanaugh piped up less than 30 minutes from taking his seat on the court, while it took Clarence Thomas 17 years to ask his first question.

Outside the Supreme Court, something else unremarkable was occurring. Approximately 20 idiotic, ultra-liberal mental midgets were performing some kind of ritualistic protest regarding Kavanaugh’s appointment to the court. Mostly women (and probably paid), they donned bizarre, cult-like outfits. These approximately 20 canoodlers were chanting, almost in tongues. That’s 20 people – yes, 20. That’s less than a half of a bus full of people. Saying that it’s less than .000000000000000001 percent of the U.S. population is being generous to these nutcases. In other words, almost no REAL people are truly upset that Brett Kavanaugh was confirmed to the US Supreme Court. More people, from a singular town, show up to a local Board of Education meeting to protest a minor spike in their property taxes.

But the phony fake news mainstream media would have you thinking that there is some kind of national outcry against Kavanaugh’s appointment. From Kavanaugh’s first day on the bench through this date, they are still portraying the farce that Americans en masse are wholly heated about Kavanaugh’s ascension to the Supreme Court. They reference fictitious polls and serve up silly pundit after pundit to explain the supposed atrocity of Brett Kavanaugh becoming a Supreme Court justice. In similar fashion, many of the Democrat elected members of the U.S. Senate and House are dribbling fraudulent nonsense about Kavanaugh’s appointment.

Why the so clearly fake news sham?

Because the far left (which is now basically the entire Democratic party) knew that they blew it with their relentless and disgustingly unjust attacks upon Kavanaugh and, thus, the man’s wife and children. As previously reported in another Empire State News article, SATAN’S PAWNS IN U.S. SENATE FALSELY ACCUSE BRETT KAVANAUGH, BUT THEIR EVIL MAY CHANGE AMERICA FOR THE GOOD:

“While keeping in mind that it is possible that Ford is telling truth, it is so unlikely that she is earnest in her condemnation of Kavanaugh that the Democrats on the Judiciary Committee should have dismissed her account, with lightning speed, after reviewing it. Ford’s allegation was initiated with a huge credibility albatross around its neck: it originated as a he-said, she-said case, where, at best, there is 50% chance that it is true. One can never know who is telling the truth in a he-said, she-said case. That, alone, should have stopped Senate Dems from going forward with an inquisition against Kavanaugh; a person’s reputation and career should never be destroyed simply based upon the accusation of one, singular person.

But Satan’s pawns plowed forward. As they raced, barefoot, through the hot coals of hell, however, they learned that this was not really a he-said, she-said case; they learned it was worse. Ford’s memory of the alleged Kavanaugh-perpetrated sexual misdeed was not an actual memory. It was a retrieved memory. Which means Ford somehow “found” this “memory” in the annals of her mind years after the incident supposedly occurred.

It is uniformly agreed among medical experts that a retrieved memory has significantly less reliability than a regular, ole’ memory. But the psychologist Ford, well, her retrieved memory was given substantial weight by Satan’s pawns. To the majority of the rest of the world, however, it caused the 50% he-said, she-said case to significantly dip below that already-low 50-50 margin. But things get even worse.

Ford conveniently cannot remember key components of her purported attack. Such as where it occurred, and when it occurred. Most people probably do not understand that there is actually a major benefit in Ford not recalling the date of her alleged assault. But, indeed, there is such a benefit – and Satan’s pawns certainly understood it. So what’s the benefit of Ford being unable to remember when the supposed assault happened?

It took away the ability of an alibi. If Ford had named the date of the alleged incident, Kavanaugh may have been able to prove that he was at a different location and, therefore, case – and Satan’s game – over. However, whether Ford, on her own, developed the date amnesia, or she was coached into it by Satan’s pawns, she nonetheless cannot name the happening time. And this further destructs her credibility. As does the following:

All four people she asserted were at the party, where the sexual assault allegedly took place, have affirmatively stated that they never attended such a party. The woman has no corroborating evidence. Put another way, Kavanaugh has multiple people corroborating that the illicit act did not occur.

All of these above factors riddle Ford’s story with credibility tank holes. Her 50-50 he-said, she-said case (which, as aforesaid, already was inadequate to destroy Kavanaugh’s life), thus has plummeted to less than a one percent chance of being a true account. But Satan’s pawns steamed on. Not only via their use of Ford, but with the propagation of the Ramirez and Swetnick allegations, which said allegations are even more incredible than Ford’s troubled account.

In the lead up to her uncorroborated mudsling, Ramirez was actually calling up friends from Yale, asking if they remembered the penis-in-the-face incident she touted (because she was uncertain about whether Kavanaugh was involved, due to her own inebriation). Ramirez’s claim was so awfully weak that the New York Times refused to report it; after a week of searching, and interviewing a bevy of witnesses, the esteemed liberal publication could not find a single person to corrobor   ate Ramirez’s accusation.

Swetnick’s story is so ludicrous that it’s not worth giving it any mention, other than to note that her advocate is Stormy Daniels’s lawyer, Michael Avenatti. He’s that awkward, angry, hairless, talentless goofball who is constantly on CNN and MSNBC making wild claims, in a desperate effort to get himself attention. Certain pundits and anchors froth at the mouth during his appearances, allowing Avenatti to dribble on about political and legal matters that he clearly misunderstands and/or misrepresents. But when he’s challenged by intelligent news studs, such as Fox News Channel’s Tucker Carlson, Avenatti goes down in flames. He may enjoy that, though, as he is an active player with Satan’s pawns, the latter even making Avenatti think he is viable 2020 Democratic candidate for president.”

The Democrat politicians and their cheerleading cronies in the media and special interest groups (or vice versa, as it actually may be) are extremely concerned that the great majority of Americans have actually sided with Justice Kavanaugh and, accordingly, those Republicans who so faithfully and fairly secured his appointment to the bench. These Democrats are so fearful not just because public opinion, in reality, is, by the great majority, so against them, given Americans’ thirst for justice and its guiding principles of “innocence until proven guilty” and “proof beyond a reasonable doubt.” But because they are well aware that their evil efforts have backfired so badly that they are going to lose their dream of recapturing the House and Senate in November. Accordingly, they surely will be continuing their media et al facade. These aren’t just evil people; they are desperate evil people. And that is a truly frightening concoction, one that so sadly has existed for quite some time – but they are unlikely to succeed in their fake news endeavors this time. And that’s because they overplayed their Grim Reaper hand, and the substantial majority of Americans know it and will back it up at the ballot box.