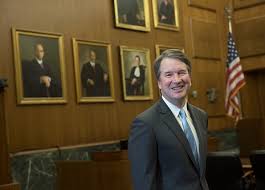 Everyone should ask himself this: do you think it would be justice if you – or your son, daughter, husband, wife, mother or father – was dragged through hearings and/or ridiculed in the media simply because one, sole person claimed you committed an offense? Should you go through the anguish of having your reputation destroyed, paying tens of thousands of dollars to a lawyer, enduring the horrors of hearings, because one person accused you of a crime?

Certainly, one person’s word versus another’s – alone, with no corroborating evidence of any sort – is not enough to justify holding hearings – and destroying a person’s reputation. “One person’s word versus another’s” is otherwise known as a he-said she-said case. Such a case is the poster child for “reasonable doubt”, as how can someone, anyone, know who is telling the truth?

If your son or daughter, or wife or husband, were going on a job interview, should you lose the job because one, singular person claimed you committed an illicit act (aggravated assault, burglary, sexual assault, etc)? Where there is no corroborating evidence of any sort that is, in any sense of justice, used to support a sole claim – such as video, audio, eyewitness testimony, physical evidence, forensic evidence, admissions? If your answer is yes – you are either lying or you do not at all care about your son, daughter, husband or wife. Since any person – who cares at all about justice – would surely never deny a person a job (nor destruct his reputation based on a lone allegation), then all such people should assess this 35+ year-old claim for what it is: an uncorroborated, unverifiable claim that can’t, in any moral manner, be used against Judge Kavanaugh.

To remove the emotion, and demonstrate how unjust it is to malign a person’s reputation (and worse, drag him through hearings), it can be best evaluated through an example: Let’s say that Martin claims that Charlie punched him in the face. Charlie denies it. There is no corroborating evidence at all. The entire case is simply Martin’s “word.”

Some judges and prosecutors (and politicians and pundits) arrogantly believe that they can assess the witnesses’ credibility and determine if they are lying, by matters such as their demeanor, the tone of their voices, if they are sweating, how their faces look, their body language, etc. Well…I am a former judge and prosecutor. And I have considerable courtroom experience (tried hundreds of cases), as well as have taught a few thousand police officers/lawyers and provided substantial analysis of criminal law on TV and in published articles…And I can’t figure out if someone is lying by how they appear on the witness stand or in an interrogation. I suppose some people either like to believe that they have special powers (e.g. – are mind readers) or are so carried away with their personal positions of power that they opine to “just know” if someone is lying and, therefore, can render a finding in a he-said she-said case. However, even though I have great confidence in my intellect and experiences, I wholly admit that I do not have this ability – and I am quite positive that no else does as well.

In the alleged Martin/Charlie squabble, we do know one thing for certain: one of the two men is lying. Either Charlie was a bad actor and punched Martin in the face. Or Martin was a bad actor and falsely accused Charlie. People have motives to lie equally the same as people have motives to commit wrongful physical acts. If the only evidence the politicians and pundits have is Martin’s word, they should never go forward on this matter (i.e. – a hearing), as under the true tenets of “justice” they will not only never be able to prove this allegation, but they will never even come close to ascertaining who is telling the truth. In other words, Kavanaugh – nor anyone – should never lose a job (and have his/her reputation destroyed) because of a singular person’s unsupported claim…Think of your son, daughter, husband, or wife – and you will agree…

Not to mention, in Kavanaugh’s case (as in many other wildly ridiculous uncorroborated claims), the unsupported allegation is decades-old, conveniently coming out publicly when he has reached celebrity status, and it is being lobbed by a woman who cannot even remember some of the most basic details concerning the alleged incident. When liars have no evidence (and disingenuous politicos and pundits know there is no evidence), they point to the notion that the accuser told his/her mother, friend or therapist about the alleged incident – and that somehow serves as corroborating evidence. Any person of moderate intelligence (or greater) knows that such is not supporting evidence. If the person is lying – he/she was lying then and is lying now. Telling another person the same lie doesn’t magically make the lie true–telling 100 million people a lie also doesn’t magically make it true.

Finally, a reverse example may be instructive: In 2002, Max tells his friend, Eddie, that he had sex with a beautiful budding, unknown actress; Max lied to his friend, as no such sexual relation occurred. Now, in 2018 – 16 years later – the actress is a superstar celebrity. Max goes on CNN and tells 100 million people that he had sex with the actress – and he points to the fact that he told Eddie, 16 years ago, that he had sex with her (as proof of the carnal event). Max was a liar then, and he is liar now–and the fact that he told someone about the alleged incident in 2002 (and now to 100 million people) doesn’t make the lie true…

Of course, no one knows who is the liar in the Martin/Charlie case, and no one would know who is telling the truth in the matter of Max and the actress. Similarly, it is literally impossible for anyone to know whether or not the allegations against Kavanaugh are true. What we do know, however, is that it is, at most, a he-said she-said case, which is woefully inadequate as an evidentiary basis to destroy a person’s reputation and/or cause them the loss of a career opportunity. And, at it worst, it’s an illegitimate, contrived story riddled with confounding flaws that is being utilized for wholly inappropriate political causes.