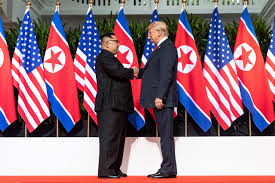 The second summit between United States President Donald Trump and North Korea dictator Kim Jong Un may be just around the corner. The surprising first summit took place in Singapore on June 12.

The tensions between America and North Korea have cooled down after this first summit between the two countries, and maybe full denuclearization for North Korea  is a possibility after the next summit. North Korea had made a promise that they would  denuclearize, but footage has shown that this claim might be false. Several news anchors and political analysts, such as Jake Tapper on CNN and Jeanne Zaino on i24 News, have speculated this assertion. Other television political analysts have correctly stated that there is progress toward the denuclearization of North Korea and that the footage might be inaccurate.

There has been no nuclear missile testing  since the last summit, and North Korea shut down their nuclear engine testing facility,  according to U.S. Secretary of State Mike Pompeo. There are rumors that the next summit will happen soon, but the location is unknown.