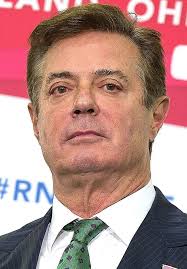 A man is on trial.

He has been held without bail.

He is being threatened with life in prison.

Who is he? A murderer? A pedophile?

No, he’s a man charged with tax evasion, ambiguous bank fraud, and failing to complete foreign lobbyist forms. The latter of which is, literally, never prosecuted criminally but instead is always treated as a civil law infraction. The two former alleged offenses, if proven, typically result in about a year of incarceration or straight probation. But this man is special.

He’s special because he was the former head of Donald Trump’s presidential campaign. He is, of course, Paul Manafort – otherwise known as the Trump campaign chairman.

It would be appropriate to provide him with a new title, one wanted by no one. A title that is usually only associated with people from nations run by dictators. A title affiliated with the worst of criminal justice systems.

The title Paul Manafort should be afforded is the title of political prisoner.

Ironically, it’s not a Donald Trump “regime” who has created this warranted “political prisoner” title in the supposedly just lands of America. President Trump’s critics have so wrongfully categorized him as a “dictator-type” when he has shown that he is quite the opposite, in going out of his way to free from prison those falsely accused and overly-charged, via a recent series of pardons and sentence commutations. The totality of his presidency has been inapposite to a dictatorial regime; instead, it has been one of fostering capitalism in a democracy.

The Trump-haters so sadly – and grotesquely – have been acting via the psychological principle of projection. They have projected upon him their dictatorial, fascist behaviors. These people are highly organized, with many tentacles and arms throughout the government, media, Hollywood, academia, and factions of certain industries; they are the deep state who have caused America to now be the home of political prisoners.

Perhaps Paul Manafort is guilty of tax evasion and bank fraud, perhaps he is not. But all of the following should be understood by those unfamiliar with American criminal law and its supposedly just system, in order to assess Manafort’s status as a political prisoner:

Tax evasion and bank fraud are rooted in notoriously vague, ambiguous, and confusing laws. Certainly, one could know that he is violating the statutes that define these offenses (e.g. – a person knows that he earned $5 million, but he purposely failed to report that income and thus did not pay the taxes on it). However, many times, these convoluted laws are misappropriated and utilized to prosecute conduct that either is unclear as to its legality or definitely does not constitute a crime.

Why are people prosecuted under such unjust circumstances? Generally, for three reasons: (1) because the law enforcement officers involved are, simply, evil – and are abusing their powers in an effort to hurt others; and/or (2) because they cannot find evidence to successfully prosecute their targets for any more serious crimes; and/or (3) because they want to squeeze the targets to obtain their testimony against a “bigger” subject.

One could argue that Paul Manafort is being prosecuted for all three of the above reasons. Apparently, the special counsel has not found any truly serious statutes to charge Manafort under, and that has left him with these marginal criminal matters. Accordingly, number (2) is accurate.

Why number (1)? Most law enforcement officers (federal agents, local police, prosecutors) are not evil. That said, it certainly is evil to falsely charge individuals with crimes. It would be unfair, however, to assert that the special counsel’s team have fabricated facts and evidence; the strength of their case, at this point, is unknown. If the evidence truly proves, beyond a reasonable doubt, that Manafort committed these specious offenses, then there has not been any evil conduct via their charging of him.

It takes an evil individual(s) to pursue life imprisonment for anyone who has committed bank fraud or tax evasion. Such a sentence squarely violates the Eighth Amendment’s protections against cruel and unusual punishment. The punishments for these types of non-violent offenses normally – and appropriately – include no term of incarceration; and when they do, it should be minimal prison time. The prosecutors in the Manafort case may not actually seek an obscene punishment for Manafort if he is convicted; if they seek only probation or a very minimal prison term, then they are not evil based upon their sentencing predilections.

A prosecutor’s morality may rightfully be challenged where he seeks that a defendant be held without bail (locked up, in solitary confinement, for 23 hours a day) while awaiting trial. The entire notion of “no bail” flies in the face of the most basic of constitutional rights: “innocent until proven guilty” and “proof beyond a reasonable doubt.” In Manafort’s case – and truly in every case where a defendant is held without bail – they are, in legal reality, being treated “guilty until proven innocent” and have had their physical freedom fleeced with far less proofs than the constitutionally mandated “proof beyond a reasonable doubt.” This pre-trial jailing also violates the Eighth Amendment, but it doesn’t necessarily mean that a prosecutor who advocates for “no bail” is evil.

The longstanding primary bases for denying a defendant bail are substantial grounds to believe that (a) the defendant poses a significant threat of danger (i.e. – death) to other person(s) in the community; and/or (b) the defendant is likely to flee if he is released on bail. In Manafort’s case, there is absolutely zero evidence that he poses any danger, of any kind, to any people, anywhere. The argument that he may flee is a challenged one, at best. Simply because he is wealthy and purportedly has foreign ties woefully fails in proving that there are “substantial grounds” to believe that he will abscond. More so, it is disputable that anyone should have his liberty revoked and be jailed because there is some perceived likelihood that he may flee; if law enforcement is so concerned about a defendant’s flight, then police personnel should monitor the defendant. In the balancing test, ensuring an individual’s physical freedom when he has not been convicted of a crime outweighs the government’s concerns of any particular defendant not appearing for trial. This, however, is a moral argument applicable to all defendants’ cases, not just Manafort’s.

The denial of bail is indeed a legal pandemic, but it is predicated upon years of propagandized precedent that the vast majority of prosecutors just accept as proper dealings. Accordingly, it is difficult (and maybe unreasonable) to label prosecutors, in general, as “evil” for seeking the denial of bail. In Manafort’s matter, the “no bail” application was palpably flawed and the prosecutors, through their maneuvering, were not carrying out justice.

Why number (3)? Paul Manafort would never have been prosecuted, much less held without bail and had a life sentence swung in front of him, if he were not Donald Trump’s campaign chairman. A novice attorney could figure out that the special counsel fixed up Manafort with these dubious charges for the sole purpose to get him to sing a song about Donald Trump. And this type of practice, although established industry standard, not only stinks for Manafort but it stinks for all of America. Far too many times, this squeezing technique causes rightfully frightened defendants to make false allegations against others – so they can have the charges against themselves downgraded or dismissed.

So far, it’s apparent that Manafort has not sung that song for the special counsel. And it seems obvious that it’s because he has no illegalities to tell about President Trump. It also may be because Manafort is a standup, principled guy. And, quite possibly, is one who has committed no crime himself. But a jury will soon weigh in on that – because the prosecution has, for the unsavory reasons described above, brought it there. And, for now at least, this prosecution has made Manafort a political prisoner.