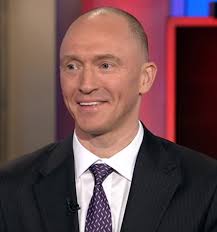 While we still have not seen the redacted portions of it, the now-released Oct. 2016 application to the Foreign Intelligence Surveillance Act (FISA) court by the FBI and the Obama administration to spy on Carter Page proves once and for all that the government did rely on the DNC and Clinton campaign-funded dossier from Fusion GPS and British spy Christopher Steele in order to spy on the Trump campaign.

The document, released to Judicial Watch via the Freedom of Information Act (FOIA), also appears to confirm the account given in the Feb. 2018 memorandum by the House Permanent Select Committee on Intelligence, that noted that the origins of the dossier were not revealed to the court: “Neither the initial application in October 2016, nor any of the renewals, disclose or reference the role of the DNC, Clinton campaign, or any party/campaign in funding Steele’s efforts, even though the political origins of the Steele dossier were then known to senior DOJ and FBI officials.”

This was the same dossier that FBI Director James Comey had testified in Jan. 2017 as being “salacious and unverified.”

The last renewal, at least as we can see in the FOIA response, came in June 2017, after Special Counsel Robert Mueller had been appointed by Deputy Attorney General Rod Rosenstein.

The Steele dossier pinned the alleged Russian intelligence hack of the DNC and John Podesta emails, which were published on Wikileaks, on the Trump campaign. Steele alleged his source had said “there was a well-developed conspiracy of co-operation” between then-candidate Donald Trump and Russia.

Steele elaborated, stating in July 2016, “This was managed on the TRUMP side by the Republican candidate’s campaign manager, Paul MANAFORT, who was using foreign policy advisor, Carter PAGE, and others as intermediaries. The two sides had a mutual interest in defeating Democratic presidential candidate Hillary CLINTON, whom President PUTIN apparently both hated and feared… Inter alia, Source E, acknowledged that the Russian regime had been behind the recent leak of embarrassing e-mail messages, emanating from the Democratic National Committee (DNC), to the WikiLeaks platform. The reason for using WikiLeaks was ‘plausible deniability’ and the operation had been conducted with the full knowledge and support of TRUMP and senior members of his campaign team.”

But the FISA application, at least the unredacted portions, never go that far. The American people need to know why. Why was Steele so sure, but the FBI had doubts? Why not cite Steele’s central charge? That the Trump campaign had “full knowledge” of the hack. Wasn’t that true?

Since that time, the Mueller indictment of the Russian spies said to have hacked the DNC and Podesta emails does not name then-campaign manager Paul Manafort or campaign advisor Carter Page, differing from Steele’s claims via his infamous dossier that the Trump campaign had coordinated with Russia on the hack and publication of emails.

Instead, the Mueller team has already appeared to rule out Manafort having had anything to do with collusion with Russia on anything, let alone the Wikileaks publication. In a July 6 court filing, the special counsel stated of the Manafort trial, “The government does not intend to present at trial evidence or argument concerning collusion with the Russian government…” To be sure, none of the charges against Manafort have anything to do with hacking the DNC or publishing the emails on Wikileaks despite Steele’s claims to the contrary.

As for Carter Page, who the FBI simultaneously claimed was a Russian agent and a target for Russian recruitment, he has not been charged with anything. In fact, Page had cooperated with the FBI in 2013 and helped the agency prosecute three Russian spies. He appeared to be victim of those spies, yet now it was being described as a recruiting attempt. Did the FBI mention the fact that the recruiting attempt was apparently unsuccessful?

Which brings us back to the FISA application, which enabled the government to spy on Page and review his contacts and presumably contacts of contacts between Oct. 2016 through June 2017. That should have also included all Trump campaign-related communications predating Oct. 2016. Was Page a backdoor to spy on the Trump campaign?

The renewal applications that came after the election appear to be copies of the original, with minor details changed, including later admission that Steele had leaked his intelligence to American news outlets, probably to have an impact on the U.S. elections.

While we do not know what the redacted portions of the application state, we do know that by Jan. 2017, when it had been submitted twice, Comey testified to Congress under oath that it was “salacious and unverified.” Yet it was still being renewed. Did the FBI express such doubts in the FISA application? At least in the unredacted portions, that cannot be seen. If they had been, the application might have never been granted.

Ever since, a cloud of suspicion has appeared over the presidency of Donald Trump.

The Steele dossier’s publication in Jan. 2017 greatly compounded the perceptions that the President was a Russian agent. That in turn has absolutely affected the discharge of Trump’s duties, with his critics suggesting he ought not have high-level, one-on-one summits with Russian President Vladimir Putin — even if the subject matter includes essential matters such as nuclear arms control — as a result.

This is beyond whether Trump or even the American people accept the findings of the intelligence community on the Russian hack.

But for what it’s worth, there were real reasons for skepticism of the 2016 Russian election interference allegations at the time, including: 1) The Jan. 3, 2017 Sean Hannity interview with Julian Assange, wherein Wikileaks emphatically denied that Russia was their source for the emails; and 2) Craig Murray, appearing to speak for Wikileaks, said that the emails were from a party insider in Dec. 2016.

Both of these were prior to pronouncements from U.S. intelligence in Jan. 2017 that it was a Russian hack.

The reports directly contradicted each other, but all you needed was to have already believed the first reports that it was not a hack but a leak, and deemed them credible in order to question the findings headed into 2017.

Everything got compounded by the CNN, Buzzfeed the charges from the Steele dossier alleging collusion. Suddenly, it appeared intelligence sources were saying not only had Russia hacked the DNC, but that the Trump campaign had helped. Those who doubted the President was a Russian agent pretty much doubted everything else to do with it. Meddling and collusion got conflated.

Buzzfeed published the dossier on Jan. 10, 2017. At the same time, Michael Cohen appeared to discredit the dossier by suggesting he had never been to Prague. Later, Cohen even provided his passport to Buzzfeed in May 2017, which appeared to confirm his account.

This was critical at the time. If Cohen had never been to Prague, then he certainly could not have been there talking to Russian intelligence officials mopping up the fallout from the Wikileaks publication of the DNC emails, as Steele alleged.

What is clear is that the collusion allegations following directly on the heels of the hacking allegations helped shape public attitudes about both. Such that if you doubted collusion, you were more likely to doubt the hacking allegations, particularly when there was a compelling alternative explanation that had been heavily promoted by trusted sources. That is not to suggest that makes those attitudes fully accurate, since one thing could be true without the other.

Russia could have in fact hacked the DNC and Podesta emails, and put them on Wikileaks, but the Trump campaign might not have had a thing to do with the planning, the hack or the publication. One item always curious about the Steele dossier was that it exhibited no apparent foreknowledge of the hack. Everything was after the fact. And then within days, in July 2016, he had cracked the case. Russia did it, and Trump helped.

We still do not know what the redacted portions of the FISA application state, or what other evidence Mueller might be sitting on. But it is hard to believe that the Trump presidency has been allowed to come this far if Steele’s central allegation of Trump campaign coordination and “full knowledge” of the DNC hack by Russia and the Wikileaks publication had been proven.

Again, Mueller only brought charges on the hack against Russian intelligence officers, and as Comey urged the American people in Jan. 2017, the charges of Trump collusion on the hack were “unverified.”

What the American people need to begin wrapping their heads around is the idea that despite the hack being Russian in origin, in 2016, that was not enough for the DNC and the Clinton campaign. They had to politicize it. They had pin it on Trump. Perhaps to equal out the FBI’s own investigation into Hillary Clinton’s private email server that contained classified information. Whatever the motive, via the Steele dossier, it was indeed politicized, and by Oct. 2016, the FBI was running with it.

Along the way, we have learned of charges of bias by FBI lead investigator Peter Strzok and his colleagues, who appeared determined to stop Trump from getting elected, and then afterward, to make sure he got impeached.

The bottom line is the Russian election meddling via the hack and the unproven charge of Trump campaign collusion are not the same thing. They need to be separated, and if the Justice Department still cannot prove the central charge, it’s time for Mueller to wrap this thing up, for all of our sakes.