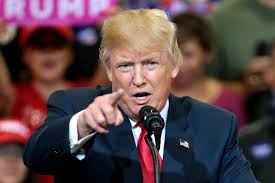 So President Trump has levied some criticism at NATO. Guess what?

President Barack Hussein Obama criticized NATO in nearly an identical fashion. And so did President George W. Bush. Both of these two most recent past presidents expressed distaste for NATO countries’ failures in meeting their financial obligations.

Like President Trump, his predecessor commanders-in-chief publicly stated their unhappiness with the U.S. carrying the great part of the NATO economic freight. Each NATO nation is supposed to spend two percent of its annual gross domestic product on defense.

At NATO summits in both 2006 and 2008 President Bush exerted pressure on U.S. NATO allies to increase their funding; this was at a time when America (and other NATO nations) were at a pinnacle point in the Afghanistan War. At the 2008 summit in Bucharest, Romania, President Bush ripped into NATO partners in saying, “”At this summit, I will encourage our European partners to increase their defense investments to support both NATO and EU operations. America believes if Europeans invest in their own defense, they will also be stronger and more capable when we deploy together.”

President Obama sniped at NATO members in Brussels right after Russia annexed Crimea. “”If we’ve got collective defense, it means that everybody’s got to chip in, and I have had some concerns about a diminished level of defense spending among some of our partners in NATO. Not all, but many,” the then-U.S. president told the world in 2014.

The mainstream media, far left pundits, and near entirety of the Democrats in Congress conveniently have forgotten the public displeasures expressed by both Presidents Obama and Bush. More realistically, these propagandists are purely and intentionally fabricating into the constituencies of both America and the international community. Why, one would ask?

Simply because they hate Donald Trump at such an unprecedented level that will criticize him for anything he does. Worse is this: they consistently lie. And lie. And lie.

And now, practically all of the mainstream media, far left pundits, and near entirety of the Democrats in Congress have no credibility with the majority of Americans and a sizable portion of international observers.