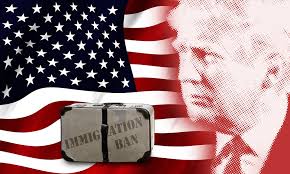 I was the first Congress candidate in the country to endorse Donald Trump, and I was the chairman of his presidential campaign in New York’s 18th Congressional District and Orange County, NY. I have stood with President Trump on the firm ground of his illegal immigration policies from the get-go, and I stand with him on it today. If you need heart surgery, surely do not see me because you would not do well on the operating table. Similarly, if the engine has failed on your automobile or if you need a house built, it would not be in your best interests to call on me for help as I am not expertised in the required fields. With regard to criminal, constitutional and immigration laws, I am indeed qualified, at the highest level. My qualifications have been provided at the end of this Op Ed, for those whose attention I have sustained.

Following is the only moral, legal, and economically rational plan to cure America’s illegal immigration pandemic:

(1) Break down – and decisively beat – the Fake News outlets, Hollywood boneheads, so-called academic elites, and plastic politicians, and actually educate Americans about the frightening prospects that U.S. citizens will certainly face if we do not eliminate illegal immigration. Simply, we do not have the land, resources or money to pay for illegals’ inhabitation of our nation. We hardly have enough funds to cover the expenses related to our own citizens. The United States will, undoubtedly, be rocked with a cataclysmic economic disaster, in the near future, if illegal entrance is not halted. Such are not the scares of the Boogey Man, but a fiscal reality.

(2) Provide permanent residency – but not citizenship – for the 800,000 DACA group (the “DACAs”). At this stage, it would be immoral to deport these people. They arrived, by no decision of their own, and have since grown families, and developed careers and friendships; many, but not nearly all, have contributed as taxpayers. That said, we cannot reward them with citizenship. And we cannot reward them with the right to vote. Affording the DACAs the aforementioned, in layman’s terms, would send a very bad message…As an aside, I repudiate the notion that they will thank Republicans for the passage of a pro-DACA deal and, my Tarot Cards tell me, that the vast majority of these people will vote Democrat. Every Democrat vote is another ballot cast toward a United States without borders, socialism, and mad redistribution of wealth schemes…As another aside, crafting the term “Dreamers” for these people is condescending and a bit insulting – to U.S. citizens who have “dreams” of the “American Dream” who, in some part, have not reached their “dreams” because of an economy stifled by illegals.

(3) Upon receiving permanent residency, each legal-immigrant-to-be must do the following: pay a $5,000 “permanent residency fee” to the U.S. government to offset the economic costs they have caused (and will continue to cause) American citizens. Given that it is understood that a large portion of the DACAs have no employment or otherwise have very little income, as part of the moral component of this plan, they can pay off the $5,000 over five years. Any who fail to make the $5,000 payment during this term shall be immediately deported; there is a singular exception – the miniscule few who suffer from a physical disability that truly prevents them from working…BTW: $5,000 x 800,000 people = $4 trillion. That’s enough to pay for the Wall and much more (see #5 below).

(4) All DACAs must provide 100 hours of community service yearly (that’s just two hours per week) within the state that they reside—every year, for five years. Any who fail in this regard shall be immediately deported; no exceptions unless a person is in a coma or a paraplegic (and that’s because there are numerous ways to provide community service, even for those physically disabled).

(5) Tie the DACA deal into the building of the Wall. Yes, only provide the DACAs permanent residency if a bill is passed by Congress authorizing the Wall at the Southern border of the U.S. That means one, giant wall along the border, just as President Trump promised during his campaign…Everything in politics – and life – is a weighing process and a balancing test. Will the Democrats hurt the DACAs and refuse to authorize the Wall? I think not.  And not because they are moral champions of these people, but because it is politically necessary for them. Via the balancing test, the DACAs will stay and the Wall be erected. And, thereafter, there will be significantly less illegal immigration.

(6) Other than the DACAs and one other small group of “illegal” immigrants who came here under Temporary Protection Status (people who originally came here legally and have been permitted to remain here far too long too morally deport at this point), all illegal immigrants must be deported. Translation: upon apprehension, they must immediately be deported…Further translation: Deport. Deport. Deport. And then they can try to enter legally…And this goes for any who have visas, which have expired. They must willingly leave upon the expiration of their visas – or be deported at the hands of the U.S. government.

(7) In passing new DACA legislation that will allow the DACAs to permanently reside in America, we are obviously opening the door to a slippery slope. For, what happens when a day after the bill passes, 100 new children illegally enter the U.S.? And what happens to the thousand who enter in the following months? And on and on and on? Will they get the same “amnesty-type” treatment and be given permanent residency like their DACA predecessors? The answer is an affirmative “no”…In the future, under no circumstances, shall there again be a DACA-like group of illegals who gain permanent residency. We have mass communications abilities, at an extraordinary level, in this modern era. Notice shall be hereby provided to all parents from across the world: from this date onward, if you illegally enter the United States with children, of any age, you shall be deported—and your children shall be deported with you. If you pass away and your children are in the U.S. illegally, they shall still be deported, regardless if they have been living in the U.S. for one day or 50 years.

(8) No sanctuary cities…Any city that serves as a sanctuary city shall be cut off from all federal funding. Any elected official who facilitates the perpetuation of a sanctuary city shall be deemed to have committed a felony and immediately removed from his/her office and compelled to serve 500 hours of community service over five years—but not jailed. We do have the 8th Amendment in the U.S., and imprisonment, under this circumstance, would constitutionally constitute “cruel and unusual punishment.”

(9) Of course, no freebies of any kind for illegals. No free education, housing, cell phones, transportation or services of any sort for illegals…Back to morals: if they have an emergency, then our hospitals must care for them. Immediately thereafter, they must be deported—and we will bill the illegals for their medical services. If they cannot pay (which, most likely, they can’t), then we shall bill the governments of the countries from which they hail. And if those governments don’t pay, we shall economically sanction those countries. This leads to:

(10) The United States shall bill foreign countries for all the economic costs that their citizens cause us through their illegal entries and inhabitations in our country. And if those governments don’t pay, we shall economically sanction those countries. This should result in nations from all around the globe enacting internal laws that stifle illegal entry into the U.S…Revisiting morals once again: of course, should any country enact legislation that would amount to “cruel and unusual punishment” against its citizens for illegally entering America, we shall economically sanction those countries for such atrocious laws. Such “cruel and unusual punishment” sanctions shall be in a monetary amount that is far greater than the sanctions that these governments would endure for their failure to pay the costs that their citizens’ cause the U.S. via their illegal immigration. Accordingly, the following should logically result: (a) these countries will pay up to us for their citizens illegal entry into America.; and (b) they will enact laws that greatly limit future illegal immigration onto U.S. soil – and such laws will be not contain penalties that constitute “cruel and unusual punishment” or any human rights violations.

(12) Disband the visa lottery system. Allowing immigrants to randomly gain entry for residency/citizenship via a lottery is foolhardy. Legal immigration should be performed on a case-by-case basis wherein an active review of applications should be conducted. We want the best here – and the best way to accomplish getting the best is by an actual submission evaluation. Not through a haphazard selection process which, undoubtedly, allows in misfits and criminals along with fine people.

Employing all of the above would substantially curtail illegal immigration and its ills which, in turn, would lead to far greater economic prosperity for America and its taxpayers. But will this happen? With strong, gutsy leadership – and the true will of the masses of U.S. citizens – this dream can come true.