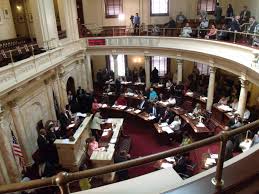 Cliffside Park resident Clinton Calabrese took the oath of office to represent the 36thLegislative District in the New Jersey General Assembly.  He stated, “It is an honor and privilege to serve the people of the 36th district and this great state. As many already know, I come from a long line of public servants. Some might even say it is in my blood.”

Clinton Calabrese currently works as a principal in Alkova Companies, which identify investment and development opportunities in the real estate market.  His credentials include work as an analyst for Deutsche Bank in their London office, and he also worked as director of acquisitions for Russo Development. Calabrese earned a master’s degree in real estate from New York University. Prior to that, he netted a bachelor’s degree in business administration from St. Joseph’s University.

Calabrese expressed his excitement “to follow in this most honorable family tradition, and work with Speaker Coughlin and my fellow colleagues on policies that will help move our state forward.”