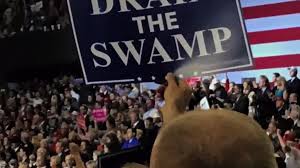 The President gave a unifying and stirring speech this past Tuesday at the State of the Union. There was one line in the speech that mostly went unnoticed by non-DC swamp dwellers but shook the swamp to its core. The President stated, “All Americans deserve accountability and respect — and that is what we are giving them. So tonight, I call on the Congress to empower every Cabinet Secretary with the authority to reward good workers — and to remove Federal employees who undermine the public trust or fail the American people.” This is how you drain the swamp.

As you may or may not know there is a “resistance” within the federal bureaucracy fighting against President Trump. These are nothing more than rogue bureaucrats that do not want to do what the President wants. If they don’t want to be there, then why don’t they quit? An employee should not be allowed to actively work against their employer, in this case, the taxpayers via the President.

These are all violations of the Federal Records Act, which requires agencies to preserve any records that relate to a government employee’s duty, including electronic messages.

More research will show the problem of federal employee misconduct predates Trump and it appears it is the standard operating procedure to ignore rules, regulations, and the law:

These are just a few examples of federal government employee misconduct, with no repercussions. Why are there no repercussions? It is almost impossible to fire federal employees.

According to a GAO study released in 2015, federal employees only have a 1 in 500 chance of being fired, while people in the private sector have a 1 in 77 chance. Out of the estimated 2.1 million federal employees, not including military, only 3,489 were removed for poor performance in the GAO study. Is the American public supposed to believe the federal government, the same federal government that could not build a website, is so adept at hiring people virtually no one commits offenses worthy of dismissal?

There is a solution. Just as President Trump mentioned in the State of the Union, giving cabinet secretaries the ability to fire employees for poor performance, and I’m pretty sure violating court orders qualifies as poor performance. Congressman Ken Buck (R-Colo.) has introduced legislation to fix this problem.

H.R. 3257, the Promote Accountability and Government Efficiency Act, was introduced in the House of Representatives in July. The bill states, “Notwithstanding any other provision of law, any employee in the civil service hired on or after the date that is 1 year after the date of enactment of this Act shall be hired on an at-will basis. Such an employee may be removed or suspended, without notice or right to appeal, from service by the head of the agency at which such employee is employed for good cause, bad cause, or no cause at all.”

The legislation would allow federal employees to be treated just like the majority of the American people. If you disobey your boss or violate company policy, you are fired. This will keep federal employees honest because they now know their actions have repercussions.

Congress should take a cue from what President Trump was able to do with the Veterans Administration and immediately move to give all cabinet officials the authority to remove federal employees for poor performance and misconduct. If Congress wants to help President Trump drain the swamp, civil service reform is the way to do it.

Printus LeBlanc is a contributing editor at Americans for Limited Government. You can read more of his articles at www.netrightdaily.com.