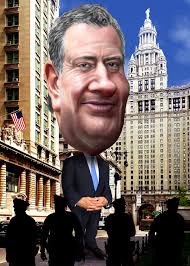 There is just something nutty about New York. First Governor Cuomo announces he is going to sue the federal government to stop the recent tax cut legislation into law. Now the Mayor of New York City Bill De Blasio is going to divest the public employee pension funds from one of the most stable, growing, and in-demand industries in the world. A little research shows this is nothing more than a political stunt, but a political stunt that could cost billions.

This week De Blasio announced his intention to divest city assets from the fossil fuel industry. It means he intends to sell all fossil fuel interests in the five pension funds controlled by the city, stocks bonds everything. Comptroller Scott Stringer plans on investing the funds into projects and assets linked to the sustainability of the planet, i.e., Solyndra like investments.

The economic impact of the fossil fuel industry cannot be ignored. The industry contributes $1.3 trillion to the U.S. economy. That would make it the 12th largest economy in the world, larger than Russia and slightly smaller than South Korean economies. With the election of President Donald Trump, the impact can only grow as the President has announced his intentions to release American energy dominance. Why would any person that cares about the financial future of their employees not want to take part in that?

More importantly, the announcement shows De Blasio believes it is acceptable to use the pensions of police officers and teachers for a political stunt, or he has no idea how the economy of the city he lives in works. So far he is talking about divesting $5 billion out of the $191 billion managed by the city. This proves it is nothing but a publicity stunt.

What about the insurance business? Major insurers like AIG are also in the fossil fuel industry. They ensure everything from the fuel to the pipelines to the people working on oil platforms.

What about the pharmaceutical industry? Petroleum is used widely in the healthcare industry, primarily as a transport fuel and feedstock for pharmaceuticals, plastics, and medical supplies, and there are few substitutes available.

The answer is a resounding no, and that’s how you know this is nothing more than a publicity stunt to get national attention for his future presidential run. The only real problem is, why is the Mayor allowed to use the other people’s pensions as a political prop for a stunt? Former President Barack Obama’s Department of Labor is the answer.

The Employee Benefits Security Administration, in the Department of Labor, issued a controversial rule on October 26, 2015. The rule states:

“The Department has been asked periodically over the last 30 years to consider the application of ERISA’s fiduciary rules to pension plan investments selected because of the collateral economic or social benefits they may further in addition to their investment returns. Various terms have been used to describe this and related investment behaviors, such as socially responsible investing, sustainable and responsible investing, environmental, social and governance (ESG) investing, impact investing, and economically targeted investing (ETI).”

This means a fiduciary can invest money into a project or asset that has a higher chance of failure or lower rate of return than traditional investments as long as the investment is “socially responsible.”

It should be illegal for the Mayor to use the pensions as a political prop, especially if the new investments are linked to often failed sustainability projects, i.e., Solyndra, Beacon Power, Range Fuels, etc. After all, a fiduciary has a legal duty to act in your best interest.

De Blasio did nothing but show his lack of understanding about how an economy works, and his willingness to use other people’s money to further his political career. De Blasio also reminded us the Department of Labor needs to resend this idiotic rule. The U.S. has a pension crisis as it is, it should not be exacerbated by giving political hacks the ability to invest based on “feelings.”

Printus LeBlanc is a contributing editor at Americans for Limited Government. You can read more of Printus LeBlanc’s articles at www.netrightdaily.com.