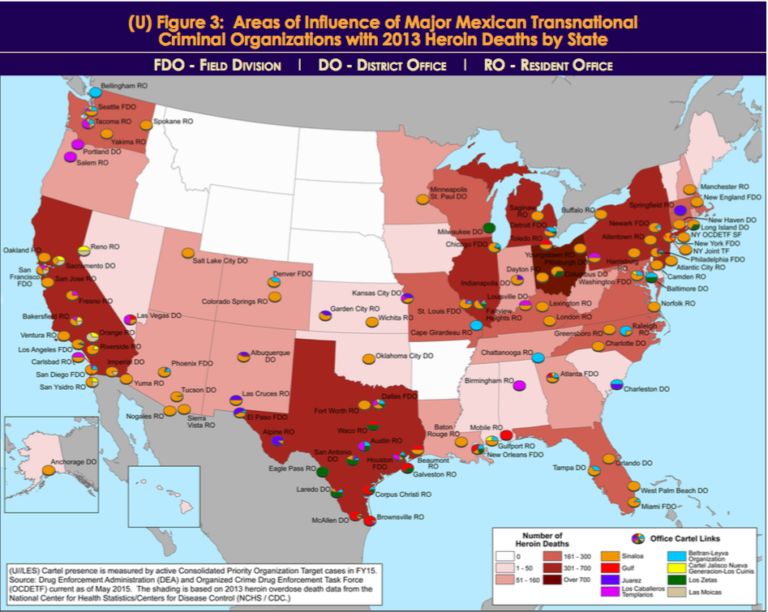 Once again, the Washington Post and the CBS “news” program 60 Minutes proved journalism is dead. 60 Minutes ran a very misleading program that attempted to pin the opioid epidemic on two members of the House of Representatives.

The truth is, this epidemic is a total government failure, just not the one 60 Minutes focused on to do with Drug Enforcement Agency distributor license suspensions, which now require Attorney General approval under a new law passed by Congress. The real problem is that multiple presidents, leaders in Congress and thousands of council members have failed in their most basic duty to protect the American people from heroin that has been coming across the southern border from Mexico.

The issue raised by the report is a worthy issue. The U.S. is currently in the midst of an opioid crisis that threatens to kill more Americans per year than many U.S. wars.

The story 60 Minutes told made it seem like the opioid epidemic somehow stemmed from a law passed in 2016, H.R. 471 Ensuring Patient Access and Effective Drug Enforcement Act of 2015. A bill introduced by Rep. Tom Marino (R-Pa.) and cosponsored by Rep. Marsha Blackburn (R-Tenn.) and five other Members. This is, of course, impossible because the law was not passed until mid-2016. The CDC has not even released data related to opioid deaths for 2016, but there the mainstream media is, blaming this law with no data to back it up.

For the drugs coming from Mexico, there is plenty of blame to go around, but you have to wonder why these two members were singled out on an innocuous bill narrowing governing a process on license suspensions that passed both the House and the Senate unanimously, and was signed into law by former President Barack Obama.

Let’s take a look at what really happened.

Yes, the opioid epidemic started with prescription drugs. In 1996, Purdue Pharma introduced an opioid-based painkiller to the market, Oxycontin, also known as Oxy. Before the introduction of Oxy, opioid-based painkillers were primarily used in patients suffering from cancer, due to their strength and highly addictive properties.

Opioid-based drugs reduce feelings of pain and trigger the release of dopamine, the most important neurotransmitter in the brain’s reward system. The drug creates a mixture of euphoria and pain relief, bringing about a relaxed and contented mood in the user. Purdue believed it got around the addiction problem by having the medication on a time release over twelve hours.

Purdue launched an all-out sales campaign targeting doctors that dealt with pain medication. The campaign itself would come under fire years later by the Government Accountability Office (GAO). In 2003 the GAO stated, “Purdue has been cited twice by FDA for using potentially false or misleading medical journal advertisements for OxyContin that violated the Federal Food, Drug and Cosmetic Act (FD&C Act), including one advertisement that failed to include warnings about the potentially fatal risks associated with OxyContin use.”

Purdue Pharma and several executives would plead guilty to misleading regulators, doctor, and patients about the drug’s risk of addiction. The company would pay $600 million in fines and fees. It turned out Oxy was highly addictive — and deadly.

Eventually, the drug companies, distributors, and pharmacists recognized the problem, and a combination of industry, DEA and medical profession action stemmed the rise in opioid-based prescriptions and overdoses, which peaked in 2011 according to data compiled by the Centers for Disease Control.

The data from the Centers for Disease Control clearly shows a dip in prescription-related opioid deaths after 2011 (before the law in question was passed), and that the real recent explosion of opioid overdose deaths centers on heroin and synthetic opioid deaths. Why do you think that wasn’t reported in the story?

What happened next is the fault of Republican and Democrat administrations both.

While attention was being paid, and rightfully so, to the prescription problem — although the disproportionate attention on the DEA distributor license suspensions authority moving to the Attorney General’s office is a bit dubious — the problems south of the border from the Mexican drug cartels, as well as city gangs and sanctuary cities was being ignored.

Mexican drug cartels saw what was happening with the prescription opioids in the U.S. and knew what was coming next, a street alternative once the pills were cracked down on. Insight Crime, an organization that study’s the threat of organized crime in Latin America, reports, “Obeying the basics rules of supply and demand, Mexico‘s cartels have changed their opium processing methods, inserting themselves into a growing market, ‘which has allowed the heroin threat to expand to unprecedented levels,’ according to the 2016 National Drug Threat Assessment Summary (pdf) from the US Drug Enforcement Administration (DEA).”

The Mexican cartels would switch from growing marijuana to opium, and make the switch in a hurry. From the end of 2005, the Bush administration, through the Obama administration, Mexican heroin production increased by almost 1000 percent. It is now estimated 90 to 94 percent of all heroin in the U.S. comes from Mexico. What does that say about the federal government when Mexican drug cartels saw the opioid crisis coming before the feds realized what happened?

Even former President Bill Clinton can identify the problem 60 Minutes ignores, telling the U.S. Mayors Conference in Miami. “Because as the government got better at dealing with opioids, more people moved into heroin. Heroin is even cheaper now because it is now being grown in Mexico in the hidden parts of the Sierra Madre Mountains and being harvested by preteens. And then it got even cheaper with fentanyl which is a synthetic drug that if you have a 13-year-old child or certainly a 15-year-old child who can make a ‘C’ in high school chemistry and access to a garage they can learn how to make. And now it’s becoming attractive to urban gangs. It’s going to eat us all alive.” Turns out, even Clinton agrees with President Donald Trump that the problem is coming from Mexico.

Due to multiple administrations failing to secure the southern border, the heroin was able to walk across the U.S. border with ease. Once across the border, the narcotics would make their way to major distribution hubs like Chicago and Los Angeles, according to reports by the Drug Enforcement Agency.

State and local politicians around the nation also bear a tremendous amount of blame for what is happening. Many cities that have become major drug distribution centers are also sanctuary cities. Cities like Chicago, Los Angeles, Washington D.C., and New York are proud to proclaim their sanctuary status and their lack of cooperation with the federal government on illegal immigrant communities that the cartels have embedded themselves in.

The local politician’s lack of cooperation with federal authorities has led their cities down a dangerous and deadly path. Somehow the strong links between sanctuary cities, weak border security, and opioid deaths didn’t make the 60 Minutes story.

As for the prescription drug problems, the 60 Minutes piece also forgot to mention the correlation between government-run healthcare and the use of prescription opioids as government insurance programs pay help pay for the crisis. A recent study by Annals of Internal Medicine, found a scary number of Medicaid patients, many of whom are elderly and disabled, 47.9 percent, receive prescriptions for opioid-based painkillers. That is elevated from 34.6 percent of privately insured individuals receiving similar prescriptions.

The Office of Inspector General for the Department of Health and Human Services released a report on opioids and Medicare. The report stated, “In total, 14.4 million of the 43.6 million beneficiaries enrolled in Medicare Part D received opioids. Medicare Part D paid almost $4.1 billion for 79.4 million opioid prescriptions for these beneficiaries. The vast majority of these opioids (80 percent) were Schedule II or III controlled substances, meaning they have the highest potential for abuse among legally available drugs.”

Another study in published in Patient Preference and Adherence in 2014 discussed the link between patient satisfaction surveys and prescribing opioids. In the survey, over 48 percent of doctors admitted to prescribing inappropriate pain medication. Doctors did this because the surveys are linked to a satisfaction score that was used by Centers for Medicare and Medicaid Services (CMS) for reimbursements. Bad scores equal low or zero reimbursements.

CBS News even did a story on the link between patient surveys the opioid crisis earlier this year. In case you were wondering, 60 Minutes is broadcast on CBS. Couldn’t they be bothered to walk down the hall and ask their colleagues about the issue? Did 60 Minutes or the Washington Post bother to ask anyone at HHS if any of their programs that spend billions on prescription drugs could be inadvertently be contributing to the opioid epidemic?

Then there is the inexplicable partisan angle on a story about a bipartisan bill that passed Congress unanimously. The 60 Minutes report made a big deal out of going to the offices of Blackburn and Marino. But did the intrepid journalists happen to go to Rep. Judy Chu’s (D-Calif.) office? Chu was one of the six cosponsors of the Marino bill. Did the investigative journalists make their way to Rep. Peter Welch (D-Vt.), another cosponsor of the bill? What about on the Senate side, where Sen. Sheldon Whitehouse (D-R.I.) was a cosponsor? I wonder why the “nonpartisan” journalists couldn’t find those offices?

Let us not forget, the measure passed with unanimous consent. That means not one single member of the House of Representatives (435) or Senate (100) chose to vote against the legislation. If that is true, then why did 60 Minutes concentrate on Blackburn and Marino?

Could it be that Marino has been nominated by President Trump to be the Drug Czar? Could the recent announcement by Blackburn that she intends to run for Senate have anything to do with the timing of the story? After all, the Washington Post wrote a very in-depth article about the issue last October that reads like a transcript for the 60 Minutes piece.

Make no mistake about it. What happened Sunday night was a political hit piece. A run of good news for President Donald Trump combined with a run of terrible news for Democrats forced the mainstream media to step in. They dusted off a year-old story and made it seem like a piece of legislation supported by all Members of Congress was specifically the fault of two Republicans while ignoring the culpability of the Obama and Bush administrations.

In the meantime, the story ignores the real heroin problem that is engulfing the nation’s streets coming from the cartels from Mexico and the city gangs that assist them. Our cities are being overrun. That is the real crisis that the left-wing media continues to ignore that is killing thousands of Americans, proving they have yet to find a low they will not stoop too.