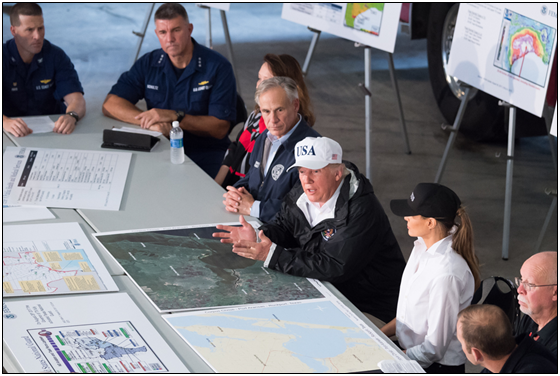 Ever since Hillary Clinton called Trump supporters “deplorables”, the left has decided President Donald Trump can be described as nothing else besides ignorant, egotistical, unqualified, divisive and racist. His name has been dragged through negativity until real tragedy struck our country. In the aftermath of Hurricane Harvey, Houston’s devastation has put Trump’s leadership on full display, a side even liberals cannot deny must be described as compassionate, helpful, and Presidential.

The only thing liberals could find themselves complaining about were the high heel shoes Melania Trump wore when getting on Air Force One to Houston. Even liberal leaning late-night comedy, “The Daily Show” Trevor Noah, who has been extremely critical of Trump, blasted the left for their hypocrisy, saying “I don’t know why anyone should care what anyone wears when they’re on their way to help people.”

He is absolutely right and has silenced the left’s attacks on Trump’s character.

Trump has now taken two visits to Texas following the storm. On the first, Trump surveyed the scene where the storm made landfall, on the second, he met with those in need in Houston and Louisiana.

Politico reported this week that Trump’s visit was accompanied by the First Lady, Department of Housing and Urban Development Secretary Ben Carson and Texas Republican Governor Greg Abbott.  While the President discussed serious political business with the Texas congressional delegation to begin rebuilding the city of Houston, his main role was as the “emphasizer in chief”.

President Trump met Americans with open arms affected by the tragedy regardless of race, religion, or political affiliation; wrecking the narrative of an unhelpful and unsympathetic or racist leader. Despite criticism from the left, Trump has now spent his days handing out food at a relief center and assuring Texans that more help was coming.

The Trump administration has made a comprehensive and collaborative effort to ensure the people of Texas are supported. Washington Examiner’s Jed Babbin explains, “Trump’s declaration of a national emergency — assuring arrival of federal forces and National Guard troops from other states as well as federal disaster relief — combined with Trump’s visit to Texas were positively presidential. The presence of Vice President Pence and Transportation Secretary Elaine Chao in Texas for long visits assured Texans that needed relief was on the way. The Marines and Navy landed quickly to help rescue trapped Texans and deliver them to disaster relief areas.”

Moved by the destruction in Houston, Trump even donated $1 million in personal funds to Harvey relief. Since the left needs some reason to complain, a tech billionaire decided to try to one up Trump and donate a few million more to Harvey relief, while some complain that Trump did not give enough, it is clear he is spurring a movement for Americans to help each other, as donations to the American Red Cross soar in this time of need.

Trump is not only giving from his own pocket. As Congress fights ideological battles over taxes and health care, Trump and his administration have taken a stand to reconstruct Texas and also to help prepare the people of Florida for Hurricane Irma now on the horizon as well. The political questions were punted to December in the debt ceiling and continuing resolution, resetting the clock, and focusing on what’s important: Houston is underwater and Florida is bracing for devastation.

With the Federal Emergency Management Agency (FEMA) running out of money just a week before Irma was expected to hit Florida, the immediately available funds for disaster relief was expected to run out just as the second hurricane hit land.

In a strong proactive approach, Trump has requested $7.85 billion in additional funds for FEMA.

No matter how hard the left tries to spin this into another Katrina, the President has proven he was and continues to be prepared and capable of leading. Trump’s strong emotional and practical response to Harvey and Irma — even putting his political agenda on temporary hold to deal with the emergency — is a clear indication that no matter what the political left tries to put him through, he will always put the American people first.