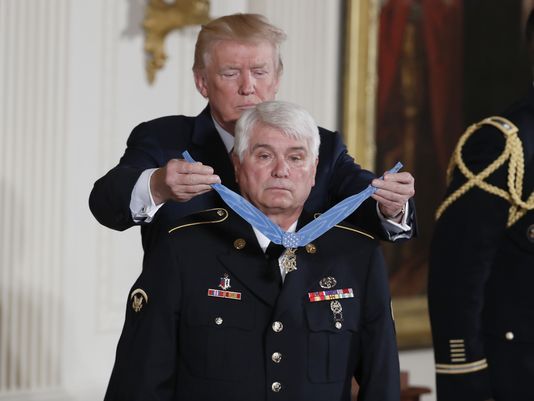 On Monday, President Donald Trump presented Spc-5 Jim McCloughan with the nations highest award for battlefield valor. McCloughan was a former medic during the Vietnam War who rescued 10 of his fellow soldiers during 48 hours of intense combat in May 1969.

Trump told the story of this brave soul while awarding him with the medal of honor. Trump said, “Jim did what his father had taught him. He gave it his all, and he just kept giving,” Trump continued. “He would not yield. He would not rest. He would not stop. And he would not flinch in the face of death and definite danger.”

McCloughan (pronounced Mc-Lew-En) was a private first class. He was involved in an air assault with 89 other men in his unit near Tam Ky and Nui Yon Hill on May 13, 1969. They lost two helicopters almost immediately by the North Vietnamese.

Trump said, ”It quickly became clear that they were surrounded by enemy troops.” With “complete disregard for his own life,” he ran 100 meters through an open field to rescue a wounded soldier, according to the award citation.

McCloughan repeatedly braved enemy fire to rescue his comrades, even though he was wounded twice during the two-day mission. He refused medical evacuation and when supplies ran low later in the battle, he volunteered to guide helicopters into the area at night by using a blinking strobe light, even as “bullets landed all around him.” McCloughan then took out an enemy rocket-propelled grenade position and other enemy soldiers while rescuing his comrades and tending to their wounds.