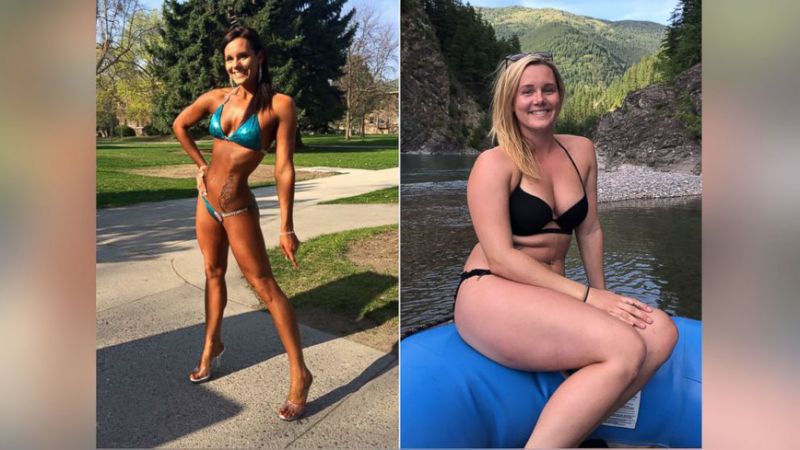 Jolene Jones, from Montana used to idolize her body in an unhealthy way by overworking herself at the gym in order to become a bodybuilder. Today she posted photo’s of her transformation stating how she has grown to truly love and appreciate her body just the way it is.

Many people fight to remain loyal to a gym regimen, a meal plan, and even stretch their limits physically but one woman fought to let go of an obsession with what she looked like on the outside in order to transform, refine and strengthen who she is on the inside.

Jones’ transformation was posted on social media and was actually backwards from society’s typical “transformation photo’s.” The first photo on the left was taken in 2015 when Jolene Jones was a bodybuilder with a spray tan, very little body fat and a smile that was more manufactured then the thread-like bathing attire she is wearing. The second photo, on the right, was taken 2 weeks ago while rafting the Middle Fork Flathead River in Montana’s Glacier National Park. It is what she currently looks like today after giving up her ‘grueling gym regimen and gaining back a social life.’

Jones posted this photo to inspire men and women to learn to what it means to truly love themselves just as they are. The post wound up obtaining more than 129,000 positive responses on social media.

Jones wrote, ”This isn’t your typical transformation photo. I went from being controlled by my grueling gym regimen and weighing chicken and having protein shakes in my purse to fully enjoying a social life.”

“Some people might say this is ‘letting yourself go’ but you can’t put a price tag on happiness,” exclaims the Kalispell, Montana, 26 year old who works at a technology materials company.

After 5 years of serious training Jones entered her first and last bodybuilding competition in 2015. Jones told ABC News, ”My initial response when I saw the [current] picture, I was kind of disgusted and then I felt bad like, ‘Why should I be disgusted with my body? My body does so much for me.”

Jones posted on Facebook, “It’s okay to enjoy your life. Your weight should not be the focus of what you’re doing. Start thanking your body for what it does for you instead of hating it,” she continued. “Foster a sense of being grateful for not only where you are, but where your body took you.”

It’s one thing to gain a sense of pride, satisfaction and self esteem for tearing up muscle fiber on a daily basis and carrying protein powder where ever you go. It’s no different then being an artist, putting on makeup or getting plastic surgery. However, how many individuals in this world can honestly say their sense of strength, self esteem, confidence and satisfaction with themselves comes from an unseen place deep down inside of who they are? Both are difficult tasks, no doubt about that, but only one will truly matter in the end.