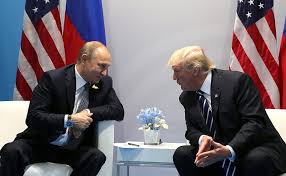 On Sunday night, hours after President Donald Trump said he and President Vladimir Putin would put an end to election hacking President Trump said a joint-Cyber Security Unit with Russia has no future. Even though Russia is suspected of meddling with the 2016 campaign Trump said he and his Russian counterpart discussed the idea when he returned from his G20 Summit. Trump continued to point the finger at the Democrats for the election hack and he gave Putin a free pass. Trump wrote, “I strongly pressed President Putin twice about Russian meddling in our election. He vehemently denied it. I’ve already given my opinion…..” Trump went on to say, it is now time to “move forward in working constructively with Russia. Putin & I discussed forming an impenetrable Cyber Security unit so that election hacking, & many other negative things, will be guarded…..and safe. Questions were asked about why the CIA & FBI had to ask the DNC 13 times for their SERVER, and were rejected, still don’t…….have it. Fake News said 17 intel agencies when actually 4 (had to apologize). Why did Obama do NOTHING when he had info before election?”

Trump continues to stand strong on his views regarding election hacking and will move forward with his plan to team up with Russia to combat election meddling. Trump’s Secretary of the Treasury, Steven Mnuchin, supported Trump’s cyber tackle on ”This Week with George Stephanopoulos.” Mnuchin said “I think this is a very important step forward that what we want to make sure is that we coordinate with Russia, that we’re focused on cybersecurity together, that we make sure that they never interfere in any democratic elections or conduct any cybersecurity.”

Sadly, the lines between who is right and who is wrong continue to be blurred when bruised political competitors  like Sen. Marco Rubio (R-Fla) who competed with Trump for the GOP nomination is caught tweeting extreme comments such as, “Partnering with Putin on a ‘Cyber Security Unit’ is akin to partnering with Assad on a ‘Chemical Weapons Unit.’”