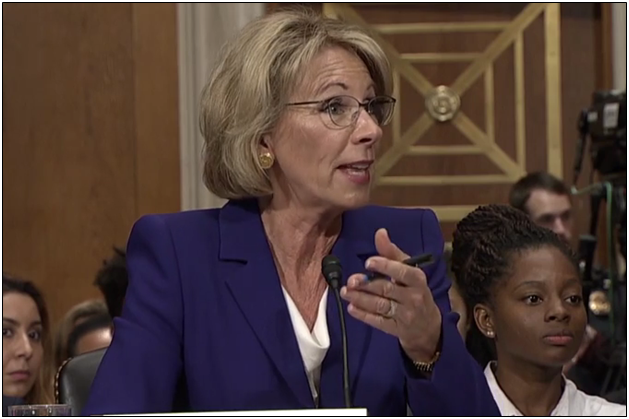 School choice advocate Betsy DeVos has faced a hard hearing for President-elect Donald Trump’s choice for Secretary of Education, but while the Democrats harp on her supposed lack of federal education policy knowledge, they ignore where education really makes a difference: on the state and local level. As education Secretary DeVos must have one primary mission — to let the states regain control over their schools and parents a choice over their children’s education.

During his time in the House, former House Speaker John Boehner helped to lay the foundation for Republican education policy as an original cosponsor of the D.C. Parental Choice Incentive Act of 2003 that eventually became the basis for Washington, D.C. school choice program and he did so with the assistance and support of DeVos. Hill contributor Cyra Master explains DeVos was “instrumental helping him establish and defend the first federal school choice initiative in America, the D.C. Opportunity Scholarship Program (DCOSP).”

The collaboration of these two led to the DCOSP operated as a successful voucher program for nearly a decade. The Department of Education’s final report on the program concluded that “The Program significantly improved students’ chances of graduating from high school and parents were more satisfied and felt school was safer if their child was offered or used an OSP scholarship.”

But the Obama administration seemed to disagree, and began phasing the program out in favor of a federal solution.  As reported by the Wall Street Journal in April 2015, despite providing the Department of Education with a $3.6 billion dollar funding increase for fiscal year 2016, President Obama offered DCOSP nothing, only eventually agreeing to a meager $20 million. The Journal writes, “About 1,400 D.C. students this year received scholarships to attend private schools. Even the President’s daughters attend Sidwell Friends, a private school. Nearly 90 percent of scholarship recipients would otherwise be stuck in a school deemed failing under No Child Left Behind.”

DCOSP proved that specific choice programs aimed at assisting students in local communities work while the one size fits all federal policies of the Obama administration have neglected the students in Obama’s own backyard. With her support for choice, DeVos through example can empower local communities rather than silencing them.

But the real choice must be made by state legislatures and local school boards. The vast majority of Americans do not live in D.C. If there is to be a push to school choice, it must happen at the state level.

Take Michigan. As the Detroit Free Press’ Erin Einhorn explained in Oct. 2016, “Instead of closing schools, Central Michigan decided to change them. It replaced school boards. Teachers and administrators say the recent changes at the Michigan Technical Academy have made their school a different place than it was during the years that produced the low scores. School leaders say the scores don’t mean students aren’t learning — just that they started very far behind.”

By encouraging school boards to take control of their student’s success and ignoring federal standards to directly assist student needs, local communities have reshaped education in Detroit. School choice is an important issue but it will remain a state and local issue rather than a federal one. DeVos can assist in facilitating state and local control by promoting it at the federal level — but again, the real solution is for citizens to demand a choice for their children through their locally elected representatives.

Unlike Obama, Trump has remained true to the initiative of school choice and focusing on student’s needs. With assistance from DeVos and Republican legislatures across the country, Trump can return funding to critical programs such as DCOSP and showing the way for local communities to implement similar programs the way they know best.