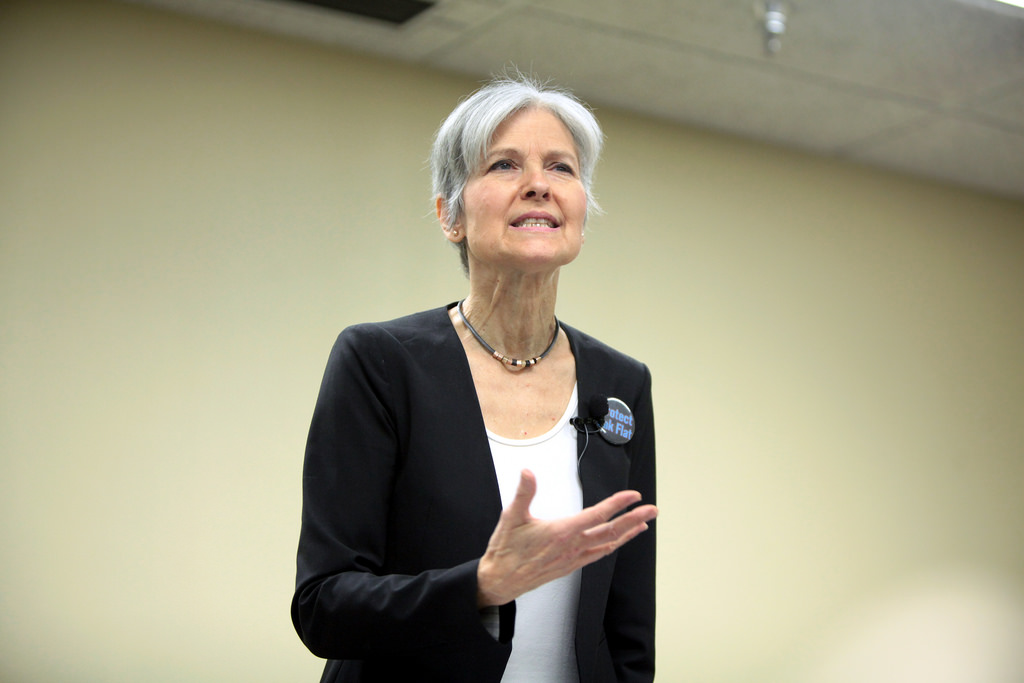 Jill Stein and the Democratic Party have not given up yet. The most recent push against President-elect Donald Trump has been the call for recounts in critical states, in hopes to not only delegitimize the entire election process and hopefully remove Trump from power all together. Unfortunately for Jill Stein, the leader in this effort, this charade only represents the hypocrisy and despair within a flailing opposition that cannot accept reality.

Stein has tapped into a Democratic political base furious with the election results and eager to fund a recount in Wisconsin, Michigan and Pennsylvania. Stein told CNN’s Anderson Cooper that “What we have are predictors that if tampering took place, it would be most likely to be discovered in the three states where we are looking.”

This allegation of fraud has allowed Stein to raise close to $7 million in funds for recount efforts, and comes despite the fact that, for example, Michigan uses all-paper ballots or that, generally, electronic voting machines are not even connected to the Internet.

However unfortunately Stein is not expanding the Democratic base at all, but rather only energizing radical Democrats unhappy with election results.  These are the same Democrats who were enraged when Donald Trump warned that he might not accept the election results, now even Hillary Clinton’s team pathetically announced on Nov. 26 that they will be assisting in recount efforts.

The hypocrisy within the party is clear. Despite once noting that it was “horrifying” to imagine Trump demanding a recount in the event of presumed fraud, the Clinton team is urging for a recount even after the New York Times of Nov. 2106 reported that the Clintons staff has admitted to having “little hope of success in any of the three states, and said it had seen no ‘actionable evidence’ of vote hacking that might taint the results or otherwise provide new grounds for challenging Donald J. Trump’s victory.”

Unfortunately for Stein and the Democratic Party, this recount effort stains the group not just as hypocrites but as desperate as well. The three states Stein has chosen to pursue make it clear how out of touch the Democrats have become with everyday Americans’ needs and is simply fighting for power.

Pennsylvania Department of State spokeswoman Wanda Murren explained in the Philadelphia Inquirer that “the deadline under the law for a voter-initiated recount at the county level had been Monday, Nov. 21. Many counties missed it but nearly half have already certified their results, precluding recounts there.” Even the state’s Democratic Secretary of State Pedro Cortes has announced there is no evidence of any form of vote tampering; making a recount both unnecessary and probably impossible since Stein will lack a key witness when she lands in court.

In Wisconsin, a recount was allowed but local municipalities were granted authority over the process of recounting the votes, for Stein even this was insufficient as some areas did not elect to count by hand. Now a recount could cost the state and taxpayers $3.5 million. But to further extend the election process, Stein has now place a lawsuit against both Wisconsin and Pennsylvania that could slow down the recounts, and prevent the electors from being named prior to the Electoral College’s meeting on Dec. 19.

In the meantime, Michigan has finally certified its election results, declaring Donald Trump the victor, and awarding all 16 of the state’s electors to him.

Stein and the Democratic Party know they need all three of these states to somehow overturn the election, and so now they are acting desperately. Even without Pennsylvania, Trump would still have the necessary electoral votes from all the other states to become President. That is why Stein’s strategy calls for halting or slowing all three states’ votes from being counted in time, denying either candidate the 270 threshold for victory on Dec. 19, and throwing the election into the House of Representatives, where Trump would likely prevail anyway.

This leaves the Democrats, Clinton and Stein acting desperately. Rather than accepting the elections results like they urged Trump to, they are desperately fighting a losing battle, suing states and costing taxpayers. Stein is not acting nobly for the fervent Never Trumpers now rioting the streets, she is undermining the electoral process which has worked effectively in this country for more than 200 years.