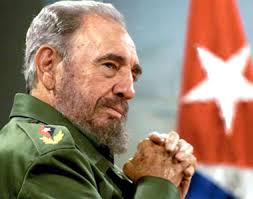 Barack Hussein Obama must have been living in an alternate reality as connected to Fidel Castro’s decades of dictatorship in Cuba. Then again, BHO has been living in a different universe – with regard to numerous political, social and economic issues – than nearly all mainstream Americans. While 99% of Cubans were celebrating, here’s what the Barackster had to say about Castro’s death:

“We know that this moment fills Cubans — in Cuba and in the United States — with powerful emotions, recalling the countless ways in which Fidel Castro altered the course of individual lives, families, and of the Cuban nation…History will record and judge the enormous impact of this singular figure on the people and world around him.”

Why would “history” need to define this man’s tyranny? The population of the world has served as a collective witness of Castro’s devastation.

Screw Fidel Castro. Right now, he is wastefully burning in the bowels of hell.

What doesn’t Obama understand? The answer: nothing.

There is nothing Barack Hussein Obama doesn’t understand about the wrath Fidel Castro levied against millions of Cubans. Barack Hussein Obama is not only a very intelligent man, but he is at the highest level of sophistication and knowledge in the areas of politics and international relations. And even if he wasn’t, he couldn’t have missed the dozens of years of torture that Castro cracked into the bodies, heads and souls of the Cuban people. So, why didn’t Barack Hussein Obama call him out on it?

Why does history need to “judge” Castro, according to the word of  Barack Hussein Obama?

Those are quite likely the motives behind BHO’s words.

Castro can be judged just perfectly – and correctly – today.

For an honest and accurate assessment of Castro and his finally-timely demise, see the words of our President-Elect, Donald Trump, who whipped:

“Fidel Castro’s legacy is one of firing squads, theft, unimaginable suffering, poverty and the denial of fundamental human rights…While Cuba remains a totalitarian island, it is my hope that today marks a move away from the horrors endured for too long, and toward a future in which the wonderful Cuban people finally live in the freedom they so richly deserve.”