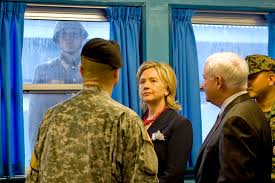 Trump showed the knowledge and resolve to perform the duties of the presidency of the United States. The operative question is, will America choose to continue along the same path or will voters elect a change in direction economically, socially and culturally?

Will voters accept an anemic 1 percent gross domestic product (GDP) growth as the new normal, with the resulting continued downward spiral of American prosperity? Will voters accept a continuing barrage of Washington regulations that tighten the economic noose around their future opportunities?

Will they accept having their taxpayer dollars used to fund an organization that sells the baby body parts of children ripped from the wombs of their mothers during late-term abortions?

Ironically, for all the high talk about the legitimacy of elections by Clinton, the just-released video proof from Project Veritas Action that her operatives paid people to disrupt Trump rallies and create violence against Trump supporters shows that it is Clinton and her team that disrespects the American political process, opting instead for a Third World approach to voter intimidation to gain power.

In the second video, a Clinton operative talking about how to perpetrate election fraud ought to send chills down everyone’s spine. Yet some want to harp on Trump’s refusal to give carte blanche approval in advance.

Combined with Clinton’s vehement opposition to the individual right to keep and bear arms that was revealed through her opposition to the District of Columbia v. Heller decision, and her continued assault on the First Amendment through her plan to appoint justices who would repeal Citizens United v. Federal Election Commission, the Democratic nominee is the most dangerous candidate in history when it comes to the future of individual liberties in America.

If possible, even more distressing was Clinton’s continued defense of her no-fly zone idea in Syria, an idea rejected by the chairman of the Joint Chiefs of Staff as possibly leading to direct war with Russia.

Incredibly, when confronted by this fact, she did not back down from her nuclear brinksmanship, but somehow tried to create a fantasy world where she would negotiate a deal with Syria and Russia to allow the U.S. to control Syrian airspace.

Only Clinton has now twice threatened escalating Syria to a military confrontation with Russia, demonstrating that she is the one who cannot be trusted with her finger on the nuclear button.

After the Las Vegas debate, Clinton has got to be wishing that what happened in Vegas stayed in Vegas, because Trump emerged from the stage as the only choice for president in 2016.

Rick Manning is the President of Americans for Limited Government. You can read more of his articles at www.netrightdaily.com