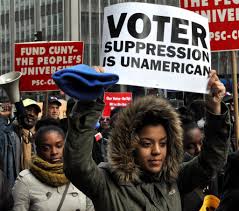 There’s a fiery presidential campaign, ongoing and with breaking news occurring on daily basis. America has never been more divided. The outcome of this race will surely lead to policy decisions for the economy, the war against terrorism, immigration reform social issues, taxation and more, which will lead to at least fifty percent of the nation being disenchanted.

The appointment of at least one Supreme Court Justice will be decided by the next president. This decision will also likely alter the course of many volatile issues facing U.S. citizens.

In New York, there is a U.S. Senate race, numerous congressional contests, and dozens of state senate and assembly races. These results will also have a great impact on the laws and policies that govern Americans’ lives.

Notwithstanding all of the above, New York has determined that residents can only vote if they had registered by yesterday. Many argue that this sort of vote-limiting action is part of the rigged election system that U.S. citizens suffer under. They feel they people should be able to register right up until Election Day, even at the polls, because – “why not”? Why allow people their right of suffrage? Why not permit every American who wants to vote, his/her right to carry it out – especially when so much is on the line?