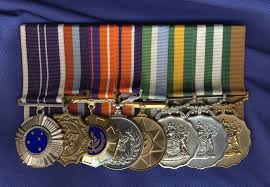 A World War II hero, who engaged the Allied enemies in France, Italy, and the Middle East, in numerous military operations has been posthumously awarded for his brave service. The family of Claude Walker, a private in the United States Army, were bestowed with the honors of several medals this week, including: the Bronze Star, Purple Heart, American Defense Service Medal, Silver Service Star, and WWII Victory Medal, as well as many others.

Walker was credited with being instrumental in the Third Infantry’s liberations of North Africa and Sicily. And his unit has been recognized with capturing nearly 5,000 German prisoners of war.

The soldier’s daughter, Shelly Walker, who was present at the Orange County, New York ceremony with siblings and many of Walker’s grandchildren, said, “If he were here, he would very humbly say that his sacrifice was no greater than anyone else’s, and certainly less than some,” said Walker. “I think that in this day and age, when everybody is doing things because they want their Facebook post or they want to be recognized in some way, understanding not just him, but what everybody in that generation was all about, is very important to know.”