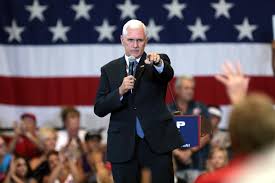 During the first – and only – vice presidential debate Virginia Senator and Democrat VP candidate Tim Kaine ranted about varied derogatory statements that Donald Trump has made about individuals. His complaints more than alluded to the notion that Trump’s ripping verbiage has been rooted in some type of bigotry. Of course, this is bullsh*t.

No doubt, the majority opinion is that Trump’s slamming of bumbleheads such as Rosie O’Donnell, Anthony Weiner and Bill de Blasio are accurate declarations (and often quite funny). Kaine and many other spin doctors ignore this reality and, more so, the fact Trump is an equal opportunist assailant of idiots and those with whom he disagrees. His beating commentary is deliberate, but it covers – with complete equity – both genders and all races, ethnicities, religions, and political affiliations. The Donald is not discriminatory.

He has called leading ultra-liberal Massachusetts Senator Elizabeth Warren “goofy”, a “lowlife”, and a lady who has a “nasty mouth.” He opined that Republican political pollster Frank Luntz is a “low class slob” and a “total clown.” Trump mocked Huffington Post founder Arianna Huffington as a “dummy.”

He has said that former GOP Pennsylvania Governor Tom Ridge is a “failed Bushy” who has a “faulty thought process.” And he has opined that Fox News anchor Megyn Kelly is “highly overrated”, “crazy”, and “never worth watching.”

Trump lambasted Republican political consultant Rick Wilson as being “dumb as a rock.” He criticized CBS news anchor Katie Couric, calling her a “third rate reporter” who “should be ashamed of herself.” And he ripped Republican pundit Charles Krauthammer as being a “dope” and an “Iraq war monger.” Not to mention, he pronounced CNN anchor Don Lemon to be “dumb as a rock.”

Yes, Donald Trump is not at all biased in his affronts. He hits hard across the board.

Hillary Clinton, however, is totally biased in her criticisms. So says Republican vice presidential candidate Mike Pence, who rebutted his adversary’s assault against Trump by very correctly noting that HRC (and Kaine) have run a campaign grounded in insults. After pointing out a round of slurs that the former First Lady has lobbed against Trump and Pence personally, Trump summed their campaign’s hypocrisy up with one quite telling very recent statement: Clinton lumped together half of Trump’s supporters as a “basket of deplorables”, labeling them as “irredeemable.”

The difference between Donald Trump and Hillary Clinton in the insult regard is simple. Clinton and her right-hand “person” (as Kaine called himself) fraudulently attempt to brand Trump as anti-woman, anti-this, and anti-that, when the truth is the man just orally smacks ANYONE (regardless of gender, race, ethnicity, etc) who he doesn’t like—and he does so on an indiscriminate, individual basis. Clinton, on the other, is a mass agent of negativity; to her, all people who favor Donald’s trademark of “Making America Great Again” are deplorable. Well, Clinton’s bulk classification is one pile of deplorable dung – and one that is quite clearly discriminatory.