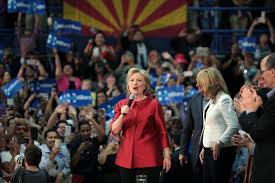 The globalist establishment is running scared, very scared. How can you tell? It is apparent by the way they are going after Donald Trump. There is no engagement on issues but rather a merciless assault of death by a thousand cuts. Not only does it reveal their level of fear of a Trump victory it also shows how little regard they have for the American people and the utter contempt they have for anyone embracing a love of country and the United States.

First, let’s take a look at the reaction of the powers-that-be since the Monday night “debate” — more like the tag-team match of Lester Holt and Hillary Clinton vs. Donald Trump. There have been rigged polls attempting to set the narrative that Hillary “crushed” the debate. One problem, once you dig into the internals of these “polls” you see quickly that they are manipulated to achieve a desired outcome. The Reuters survey was the most blatant — showing Clinton with a 6-point lead while neglecting to mention that they over-sampled partisan Democrats by a huge percentage.

Most people do not pay attention to these so-called polls because the people have come to understand that they are nothing more than propaganda tools designed to make the public think something is popular and therefore something they should support. There is no science in most of them, little more than a 10th grade essay on “why I love Dear Leader” that is being assigned in places like North Korea.

But all these polls are only setting the table for a herd of ankle biting non-issues designed to divert the attention of the public away from the serious issues that are threatening us all. We have a story by the reliably leftist Newsweek about something one of Trump’s companies may or may not have done concerning Cuba twenty-five years ago. The purpose is clear — hurt Trump with the crucial Cuban community in south Florida. Now, ignore the fact that Clinton has aided the brutal communist regime in Cuba, turned a blind eye toward Cuban treachery in South and Central America and done absolutely nothing to aid the political prisoners in Castro’s dungeons.

And, then there is the New York Attorney General digging up some extremely minor paperwork issue on the Trump Foundation — a real charity not the pay-to-play graft and corruption engine called the Clinton Foundation. To hear the leftist press tell it, this extremely minor paperwork oversight somehow equals the Clintons shaking down corporations and foreign governments for tens of millions of dollars while Madame Clinton ran the State Department and American foreign policy. Yeah, they sound about equal.

Finally — at least for the moment — is the nonsense of the Miss Universe pageant. Really? Somehow what Donald Trump said to a contestant on a program he owned — comments to a woman so unstable that a judge had to take protective actions against her — that rises to the level of national importance?

All of these silly, bogus non-issue issues are merely designed to draw the public’s attention away from things that really matter; things like an economy that is teetering on the edge with no plan in sight on how to address it, trade deals that are purposefully shipping millions of good paying jobs overseas so a handful of international bankers and corporations can make a few more cents profit, an immigration system that is totally broken releasing thousands of dangerous criminals onto our streets and permitting millions to flood our borders to undercut wages and incomes of American families.

And, then there is the threat from radical Islamic terrorism. Obama and Clinton simply will not protect America. They refuse to call the threat by its real name, bow and scrap to foreign kings who hate us, give billions of dollars to Iran and then walk away as the radical nation continues to build nuclear weaponry.

America is in dire peril and all Hillary Clinton and the demented clowns serving her want to talk about are meaningless issues of no substance. It is long past time to get serious about this election. Hillary Clinton has shown beyond doubt that she is unfit for anything other than a jail cell or a hospice ward. She and the legacy media that serve her like Igor in Young Frankenstein need to be forced to address the real and growing threats to America. The media will not do it. The professional political class — regardless of what party they claim to belong to — will not do it. And, you can bet the self-appointed culture spokesmen, whether in Hollywood or academia, will not do it.

Bill Wilson is a member of the board of directors of Americans for Limited Government. You can read more of his articles at www.netrightdaily.com.