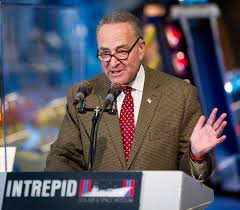 “This rare moment of bipartisanship is a testament to the strength of the 9/11 families, and the validity of their pursuit of justice. Overriding a presidential veto is something we don’t take lightly, but it was important in this case that the families of the victims of 9/11 be allowed to pursue justice, even if that pursuit causes some diplomatic discomforts. I hope the House will quickly follow suit so that the families can have the day in court they deserve.”

Meanwhile, Schumer’s Republican opponent in his bid to remain his seat, Wendy Long, is touting her “A” rating from the National Rifle Association (“NRA”). In chiding Schumer, a Democrat, from receiving an “F” from the NRA, Long stated:

“My opponent is the biggest enemy of the Second Amendment in the entire Congress. And he has stated that his goal is to stack the Supreme Court with liberal Justices who will drive a stake through the heart of our constitutional right to keep and bear arms, if he is re-elected. I have pledged to the people that I will defend their Second Amendment rights, which come from God and not from government. there could not be a greater contrast between our positions”

Although Long likely voices the concerns of gun rights activists, it’s doubtful that Schumer will be upset over his low rating from the NRA.