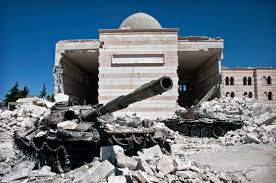 A tentative truce brokered Sept. 9 by the U.S. and Russia on Syria aims at allowing the Syrian people to take the necessary time to recover from years of oppressive and violent rule from leader Bashar al Assad and the ravaging terror of Islamic State.

However, instead of an effective multinational solution which might end the hostility, the U.S. appears to have brokered a feckless ceasefire, emboldening the Syrian people’s national predators and isolating the nation’s real problems.

Now Secretary Kerry is praising Russian involvement in the area, during a press conference discussing the deal Kerry said, “Sergey Lavrov and I, on behalf of our president and our countries, call on every Syrian stakeholder to support the plan that the United States and Russia have reached, to… bring this catastrophic conflict to the quickest possible end through a political process.”

While coming together in the interest of peace might seem like a noble venture, in reality the inconsistency of the U.S. mission in Syria — which once sought the overthrow of Assad — has provided opportunity for the growth of terror in the region and even shown submission to Russian authority.

The ceasefire, which includes the Syrian government as well as Iran and the Lebanese Hezbollah armed group, does not include Islamic State. Neither is the growing presence of the Jabhat Fateh al Sham, a group who recently cut ties with al Qaeda has pledged no end to their obstruction. These groups now may have a critical opportunity to advance their initiatives due to the silence of government forces and other internal opposition they must usually fight against.

Rebel forces were aware of the ceasefire’s ability to spread terror, and spoke against it consistently. According to a Middle East Eye report from just after the ceasefire began, nearly a dozen internal rebel groups called the agreement unjust and believe it will “reinforce the suffering” of civilians.

A ceasefire cannot work with the main perpetrator of violence, Islamic State, is still able to commit atrocities while the people are silenced.

But this result is not a surprise, the Russians have never cared about the continuation of terror or destruction in Syria per se, their goal has been the reinforcement of the Assad regime, a Russian satellite, despite the threat to the people.

In five years, the International Business Times finds Assad’s attacks on his people to be responsible for more than 86,000 civilian deaths. Yet Russia continues to support the regime due to their political alliance, and now the U.S. is apparently supporting Russia.

Which is why it is no surprise the ceasefire has resulted in exactly what the Russians were hoping it would, the dominance of Assad.

In any event, the ceasefire was short-lived. The Washington Post of Sept. 12 reports that “Residents and activists of the besieged rebel portion of Aleppo said that Syrian government helicopters had dropped barrel bombs on one neighborhood of the city and that loyalist forces were shelling a route intended to be used for the delivery of humanitarian aid.” This occurred within hours of the ceasefires beginning and reports of violence continue to trickle in.

Secretary Kerry has not only allowed Assad to fortify his power, but the beacon of hope that the U.S. once was for rebel forces has been lost, providing them with no faith in the future of their country. As they recede, Islamic State could fill the void.

In the meantime, as the war drags on in the region in spite of meaningless U.S.-sponsored ceasefires, the appearance of U.S. strength in the region continues to wane. No longer purporting to stand with the Syrian people being harmed by the war, instead the U.S. is apparently acquiescing to Russian hegemony over the region.