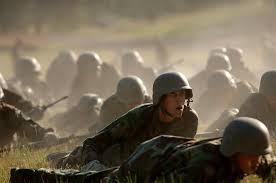 The military has long worried that an over-reliance on prescription painkillers for the after-effects of tours of duty was putting both veterans and active-duty troops at risk of dependency, serious adverse reactions to the drugs and accidental death. The problem was found to be greatest among veterans returning from Iraq and Afghanistan—particularly those with post-traumatic stress disorder—who, according to a recent study published in the Journal of the American Medical Association (JAMA), may have been given “inappropriate prescriptions” for opioids in a misguided attempt to relieve their suffering quickly.

Now, however, change appears to be coming as the military expands its use of alternative treatments such as chiropractic care.

Dr. Robert D. Kerns, the national program director for pain management at the Department of Veterans Affairs, told the New York Times that the study “encourages” both his department, as well as the Pentagon’s health system, “to build on … existing initiatives.”

If done, that would be good news to Congressional committees following up on last year’s Veterans Health Administration scandal.

“We have said for a long time that sending a veteran out of the door with a bagful of pills is not a solution,” Rep. Jeff Miller, R-Fla., said in investigating allegations that a Tomah, Wisconsin, Veterans Affairs hospital was prescribing “excessive dosages of opiates.”

Even as more research pours in, chiropractic care continues to gain support. A 2013 study published in the journal Spine found that 73 percent of participating active-duty military patients with low back pain receiving a combination of chiropractic manipulative treatment and standard medical care rated their global improvement as “pain completely gone,” “much better” or “moderately better.”

To learn more about chiropractic care or to find a chiropractor in your area, visit www.F4CP.org/findadoctor.