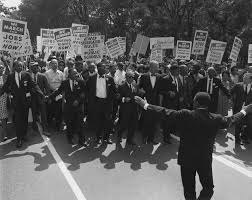 Activists are memorializing three civil rights field workers who were abducted and brutally murdered by the Ku Klux Klan on June 21, 1964 for educating and registering African Americans to vote during what was then known as Freedom Summer.

Participants will stand vigil outside of Sen. Chuck Schumer and Sen. Kirsten Gillibrand’s Manhattan office building to engage the public about the anniversary of the murders and to advocate for campaign finance and voting rights reforms in honor of the slain activists.

The deaths, originally reported as disappearances, made national headlines in 1964 as the search for the bodies of Andrew Goodman, Michael Schwerner, and James Chaney continued until August. When the bodies were finally discovered, they had all been shot. Chaney had been severely beaten prior to being murdered.

News of the murders hit especially hard within New York’s Jewish community: Goodman was born and raised on Manhattan’s Upper West Side and Schwerner was native to Pelham, New York. Both grew up in Jewish homes. Chaney was an African American who resided in Meridian, Mississippi. All were in their early twenties at the time of the murders.

As a result of the formidable traction of the Civil Rights Movement and spurred by the events of Freedom Summer of 1964, Congress passed and President Johnson signed into law the Voting Rights Act of 1965. Sadly, the Voting Rights Act of 1965, once viewed as a testament to Americans of conscience who lost their lives in the struggle for racial justice and voting rights, many of the protections the law once guaranteed were gutted by the Supreme Court in the 2013 decision in Shelby v. Holder.

Those joining in the vigil for Chaney, Goodman, and Schwerner hope to inspire their fellow citizens to take action by calling on their elected officials to pass legislation that re-establishes the protections of the Voting Rights Act and guarantees the integrity of the vote by modernizing our election system, augmenting voter registration, facilitating voter access, and implementing a publicly financed campaign system that will elevate the power of individual votes over the influence of money in politics.