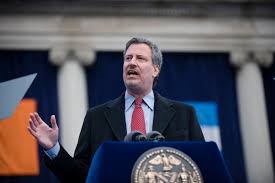 Mayor Bill de Blasio is at it again trying to influence control of the State Senate, this time through Pound Ridge resident Alison Boak, who recently received the Democratic nomination in the 40th Senate District with barely 40% of the vote. Boak, whose campaign is being run by Team de Blasio, is likely to face a primary from fellow Democrats Deborah Carter-Costello and Andrew Falk, who has secured the Working Families Party endorsement.

Senate Republican spokesperson Scott Reif said, “Bill de Blasio is once again trying his hand at a Hudson Valley takeover, this time through Ali Boak, who has ties to the Mayor’s criminal fundraising apparatus. Ali Boak has never won a competitive election, and her campaign will never get out of the gate if she can’t adequately explain and disavow her relationship to Mayor de Blasio’s preferred vendors who are running her campaign while under subpoena in a criminal investigation.”

Boak has retained the services of Red Horse LLC, a consulting group that has been subpoenaed in the ongoing criminal investigation into Mayor Bill de Blasio’s campaign finance scandal in Putnam County. She refused to comment to the Peekskill Post about the connection.

Dozens of published reports about the six ongoing criminal probes into Mayor de Blasio’s fundraising apparatus have variously named Red Horse as a “preferred vendor” that 2014 candidates were required to hire in exchange for campaign cash that was washed through upstate county committees. Red Horse was also the designated vendor for the Mayor’s non-profits, while this same firm also served as a lobbyist for clients with pending business before City Hall.

Reif continued, “Alison Boak must not only explain her connection to the de Blasio pay-to-play scandal, she has to come clean about her illegal rental property in Florida. 2016 will be the third time voters will reject a Bill de Blasio handpicked liberal like Ali Boak who acts only in her own self-interest.”

As a candidate, Boak has yet to respond to the published reports about criminal nuisance complaints over a rental property in her name at 211 Willow, Anna Maria, Florida, Reif explained. Boak continues to advertise rental opportunities of the property despite the state of Florida suspending her license following multiple code violations that have resulted in the property being investigated and cited by the Manatee County Sheriff’s Department and local code enforcement officers.