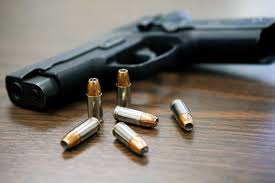 Brooklyn District Attorney Ken Thompson today announced that a 55-year-old man was sentenced to 23 years to life in prison for shooting a man in the face outside a New Year’s Eve party in 1991. The defendant was arrested in 2007 in Alabama, where he lived under an assumed identity. He was found guilty in 2011, but that conviction was overturned on appeal.

District Attorney Thompson said, “Justice finally prevailed in this case and a man who committed a brutal murder will now pay for his actions. I hope that the victim’s family, who waited so many years for some closure, will find solace in today’s sentence.”

The District Attorney identified the defendant as Derrick Lloyd, 55, of Montgomery, Alabama. He was sentenced today by Brooklyn Supreme Court Justice Neil Firetog to 23 years to life in prison, following his conviction on March 24, 2016 of second-degree murder after a jury trial.

The District Attorney said that, according to trial testimony, in the early morning hours of January 1, 1991, the defendant left a house party at 5624 Farragut Road in East Flatbush, Brooklyn, looking for an intoxicated man who had caused a disturbance at the party. He approached a group of people seated on a bench and demanded to know where the person he was looking for went. No one was able to answer the defendant.

The defendant then stated, “I want answers now,” the evidence showed. William Smith, 22, replied with words to the effect of “We all want answers” and the two got into a fight. In the course of the altercation, the defendant pulled out a gun and shot the victim in the face, killing him, according to testimony.

The defendant was identified by a witness on the day of the incident, but could not be located. In August 2007, he entered a Department of Motor Vehicles location in Alabama, where he has been living under the assumed name Rashad Hamid. A clerk noticed that he was using fraudulent documents and the defendant was subsequently identified as Derrick Lloyd, who had been the subject of an extensive search and featured on the “America’s Most Wanted” television program.

He stood trial in 2011, was convicted and sentenced to 18 years to life in prison. An appellate court overturned the conviction in 2014 and ordered a new trial.