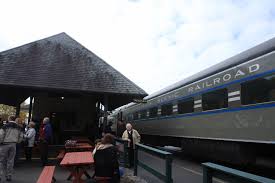 In 2015, the Adirondack Scenic Railroad broke all records by carrying over 74,000 passengers, an all-time high for the 24-year old organization. If Spring 2016 sales are any indication, the Railroad projects that 2016 will break the previous year’s record.

The spring season kicked off March 26th with the Easter Bunny Express, a train ride geared for children and families, which travels from Holland Patent to Remsen. The event sold out over a month in advance, even with additional added capacity. A total of four trips carried over 1,500 passengers.

Every year, tickets for The Polar Express go on sale April 1st. This time-honored tradition is the Adirondack Scenic Railroad’s largest fundraiser and has grown to carry over 18,000 passengers annually. Numerous peak dates and times are already completely sold out in Cocoa Class, and nearing capacity in coach. Polar Express sales in April of 2015 increased 91.8% over the same period in 2014, and April sales for Polar in 2016 have surpassed 2015 by a tremendous 146%.

The next train departing on Adirondack Scenic will be the season’s first Beer & Wine Train, on April 22nd. Although this train also sold out weeks in advance, pre-sale tickets for the monthly Beer & Wine Trains are available at www.AdirondackRR.com. Entertainment throughout the season will be provided by an impressive list of local bands and musicians featuring the The Mechanix Trio, The HazBinz, Rabbit and the Rye, and many more. The beer and wine selections will highlight some of the best wineries and microbrews that the area has to offer; along with domestic brews and vintages.