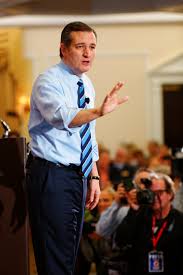 Republican Presidential candidate and United States Senator from Texas Ted Cruz will be a featured guest at the 2016 New York Republican Annual Gala to be held on April 14th at the Grand Hyatt in New York City.

All three Republican candidates for president will attend, joining the evening’s honoree New Mexico Governor Susana Martinez. As previously announced, the event will be held less than a week before Republicans go to the polls to vote in the New York presidential primary, which will be held on Tuesday, April 19th.

“We’re thrilled to welcome Senator Cruz as a featured guest at our gala,” said Chairman Cox. “New Yorkers are engaged in the primary process like never before. We are a big, diverse state, but every year Republicans from Buffalo to Montauk gather together to celebrate our Party, and we’re grateful Senator Cruz will be joining us on this important evening less than a week before the election.”

This is a ticketed event only; for details please visit nygop.org. This event will be open to credentialed members of the media. Further details and media RSVP requirements will be forthcoming.