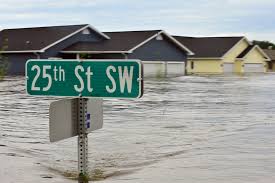 The committee approved the Flood Insurance Market Parity and Modernization Act (H.R. 2901), which seeks to clarify that private insurance is to be treated the same as federal flood insurance in cases where homeowners with federally-backed mortgages are required to buy the coverage.

Supporters believe the bill will foster more competition in the flood insurance market, providing an alternative for 5 million property owners who rely on the U.S. government’s National Flood Insurance Program (NFIP), which is $23 billion in debt.

Supporters include the insurance industry, state insurance commissioners, as well as taxpayer and environmental groups including Taxpayers for Common Sense and SmarterSafer.

The current mandatory purchase requirement does not require that the insurance coverage be provided under the NFIP, however, mortgage lenders have said they are uncertain that private flood coverage satisfies current regulations and have mostly only accepted NFIP policies. Thus the bulk of the business is written with NFIP.

The legislation would define as acceptable a policy issued by a private insurance company that is licensed, admitted, or otherwise approved in the state in which the insured property is located. A policy issued by a non-admitted insurer would also qualify.

Miller said that encouraging additional carriers into the market will provide consumers with access to additional options for flood insurance products.

“We have heard stories of consumers getting substantial savings from private flood insurance as opposed to the NFIP product,” said Miller. “In one particular case, a consumer’s annual premium under NFIP was $7,500, but a private plan offered similar coverage for $1,415. In another instance, the federal NFIP premium was $6,000, while private insurance was just $900.”

Insurance agents have also backed the Ross-Murphy legislation. According to the Independent Insurance Agents and Brokers of America (Big “I”), because mortgage lenders are unsure whether private market alternatives satisfy the “mandatory purchase” requirement, they are either requiring the private policy to look nearly identical to an NFIP policy or, in many cases, simply not accepting private policies.