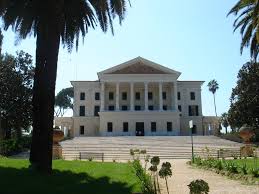 Manhattan U.S. Attorney Preet Bharara said: “The Torlonia Peplophoros was stolen in a brazen theft more than 30 years ago, and we are proud to have recovered it so it can finally be returned to its rightful owners. We will continue to work with our law enforcement partners to recover and return stolen treasures no matter how long they have been missing.”

FBI Assistant Director-in-Charge Diego Rodriguez said: “Stolen artwork and culture items belong with their rightful owners no matter how much time has passed since the theft. The FBI is pleased to help with the return of the Torlonia Peplophoros to its rightful home in the Villa Torlonia museum in Rome.”

According to the allegations in the Civil Complaint unsealed today:

In 1797, Giovanni Torlonia, a famous Vatican banker in Rome, purchased what is now called the Villa Torlonia (the “Villa”) after inheriting the title of Marchese. The Torlonia family owned the Villa until 1977, though it was used by Benito Mussolini as his personal residence from 1925 to 1943, and then occupied by the Allied High Command from 1944 to 1947. After 1947, the Villa was abandoned and deteriorated until the Municipality of Rome purchased it from the Torlonia family in 1977.