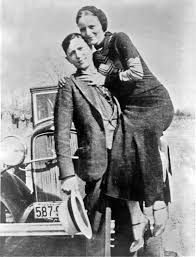 A 1923 silver certificate dollar bill, signed by the notorious outlaws Bonnie and Clyde, examined and declared genuine by a respected and qualified document examiner, is the expected headliner in an Internet-only auction now online and slated to end March 1st. The sale is being held by Mayo Auction & Realty. Items can be viewed and bid on now, at BidMayo.com.

The seller of the dollar bill is Anthony “Tony” Byram of Mexico, Mo. He said the dollar bill was signed by Bonnie Parker and Clyde Barrow after they ate lunch at his grandmother’s restaurant in Bowling Green, Mo., probably in the spring of 1933, at the height of their notoriety and while they were on the run from authorities. The bill was given to the cook, who later gave it to Byram.

Mayo Auction & Realty is no stranger to items connected to Bonnie and Clyde. In January 2012, the firm auctioned a pair of guns believed to have been owned and used by the pair: a .45 caliber Thompson sub-machine gun and a 12-gauge Winchester model 1897 shotgun. Then, in February 2013, it sold a Smith & Wesson revolver retrieved from their stolen car at the time of their death.

“Both of those auctions received enormous international attention, but you could make the case that the signed dollar bill is far more important, both historically and from the point of view of a collector, because Bonnie and Clyde signatures are so incredibly rare,” said Robert Mayo of Mayo Auction & Realty. “Only four are known to exist. One is from an arrest fingerprint card. We’re not aware of another instance of a single document that contains both of their signatures.”

While the signed dollar is the sale’s undisputed star, other important items will also come up for bid. These include a dress personally owned and worn by Jacqueline Kennedy Onassis, while she was First Lady and living in the White House; and a Civil War-era copy of Harper’s Weekly that shows an unfinished Capitol building in Washington, D.C. on the cover. It’s dated Aug. 23, 1862.

About 75 of the sale’s 100 lots will consist of rare and vintage posters, all of them deaccessioned by the Atchison Historical Society in Kansas. Most are circus posters, showing classic and wildly colorful images from the big name circuses of the day, such as Ringling Brothers and Barnum & Bailey. A few are 4th of July and rodeo-themed, and another is an Amelia Earhart stadium poster.

Also in the sale is an original copy of the Golden Dreams calendar from 1955, showing a nude Marilyn Monroe, with all the months intact; an original illustration by Louis S. Glanzman, the artist who drew numerous covers for TIME Magazine and whose artworks hang in the White House today; and an eagle statue fashioned from crushed pecans, from the Jimmy Carter Library.