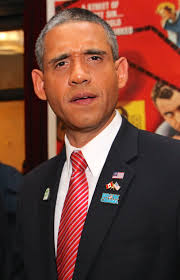 Many people have remarked about the strange eulogy President Obama delivered from the Oval Office in the aftermath of the San Bernardino attacks. It seemed to some more like an exercise in defending Islam rather than honoring the dead, comforting the living, or expressing our righteous fury at the perpetrators of this barbarism. Throughout the speech, the President was deliberately obtuse when it came to naming the culprit — he referred to “ISIL,” “terrorists” and attackers, but never named the real culprit: the capricious ideology of radical Islam.

Obama’s Oval Office speech was roughly equally divided between a smattering of canned platitudes for the deceased, the brittle rattling of a litany of his tepid policy initiatives, and a literally shocking admonishment to America warning us about threatening his new chosen people — peaceful Muslims. It was not so much the substance of his speech that reveals the President’s alarming myopia. It was the balance of his rhetoric, tone and inflection during the speech that proved to be most disconcerting.

I found it so surreal, in fact, that I had to go back and listen to the speech several times before I could lay my finger on what was missing. The first few minutes in which he eulogized the dead seemed oddly paced — too quick, like he was rushing to get to the real substance of what he had to say. It was marked by an abrupt departure in which he pivoted into what he intended to do to curb “ISIL”, beginning with the phrase, “here’s how.” He then rattled off a list of policies he’s already proposed in a defensive, strident tone that seemed like a reluctant concession at best; and at worst an obstinate refusal to confront reality. He added nothing new in the way of policies designed to deal with the increased threat of radical Islamic terrorists already on U.S. soil. But even more upsetting, despite the fact that he has patently refused to actively engage radical Islamic terror here at home, he was quick to foreclose the option of Americans arming themselves to protect our communities against the terrorists in our midst.

This has been a theme with Obama since he first took the victory lap around Europe and the Middle East at the beginning of his Presidency. He seemed to believe that his very presence would quell the rabid onslaught of radical Islam and usher in a new era of peace and prosperity in the region. The President’s naivete culminated in a speech he gave in 2011 in response to the Tahrir Square protests in Egypt. “I am confident,” the President said, “that the people of Egypt can find the answers, and do so peacefully, constructively, and in the spirit of unity that has defined these last few weeks. For Egyptians have made it clear that nothing less than genuine democracy will carry the day.”

We all know how that turned out. In the immediate aftermath of the Tahrir Square protests and President Hosni Mubarak’s ouster by the Egyptian military, the country held free elections. But it elected a President in Mohammed Morsi who was affiliated with the Muslim Brotherhood, and who immediately began a ruthless crackdown on the very pro-democracy organizations that brought him to power. Morsi began jailing dissidents and journalists and ultimately engineered a cold-blooded massacre of peaceful protesters in the very same place that had spawned the heralded Arab spring — Tahrir square.

And still Obama did not see the threat emerging in front of him. The ouster of Mubarak and other old-line Arab leaders was supposed to (in theory) quell the threat of Islamic extremism, but instead it unleashed it. Fast forward to Libya. The Obama administration sought to “lead from behind” in supporting the ouster of President Muammar Gaddafi. This was also supposed to be a great moment in the annals of Arab democracy. Instead, in the chaos of the aftermath of Gaddafi’s ouster, significant portions of the country fell into the hands of Islamic extremists. The result: for the first time since 1979, a U.S. Ambassador was killed in office.
And yet, even the events in Benghazi, Libya, as tragic as they were, failed to alert the President to reality. He was so bent on using the momentum created by the “Arabic Spring” to bring his liberal panacea to fruition that he applied the same doomed strategy to Syria. He made the catastrophic mistake of believing that the enemy of our enemy — in this case Syrian dictator Bashar El Assad — was our friend. And in doing so, he ended up arming supposedly “moderate” opposition groups with weapons that ultimately made their way into the hands of ISIL. Faced with the results of his folly, he then dismissed ISIL as the “JV team” of radical Islamic extremism. Other leaders in the region were not so naive. When asked whether he intended to get involved in the Syrian civil war, Israeli President Benjamin Netanyahu said he would do so only if he had a clear side, which at the time he didn’t. He was further quoted as saying, “when two of your enemies are fighting each other, I don’t say strengthen one or the other, I say weaken both, or at least don’t intervene.”

Does Obama have a blind spot when it comes to radical Islamic extremism? The short answer is no. His inability to see reality could be called a ‘blind spot’ only if it were apparent that he was trying to use his peripheral vision to see the bigger picture. Instead, the President seems to be suffering from tunnel vision. He only sees his objective, and fails to realize that intervening circumstances have significantly altered the calculus.