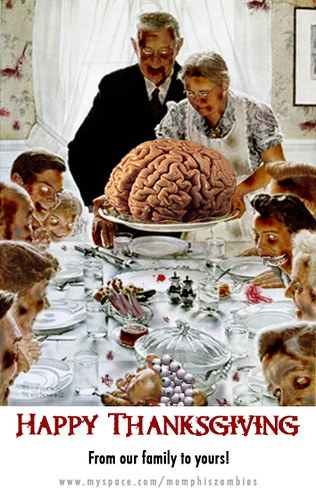 SOCIALISTS – History tells us that all socialist societies have failed, most turning into communist dictatorships. Let’s be thankful for capitalism, which is the only economic governing format that can lead to obtaining the American dream.

VEGANS – How the hell do these people enjoy Thanksgiving?

BLACK LIVES MATTER PROTESTORS – I would like to employ my mathematical skills here. Black Lives Matters protestors = racists. Thus, they are losers, as the vast majority of Americans hold them in great disdain for their anti-American rages.

ABORTIONISTS – They are always losers.

NANCY PELOSI & AL SHARPTON – Are they engaged? I thought I heard that rumor. In any case, they’re also always losers.

BERNIE SANDERS – See the first group of people on this list. He’s the leading pure socialist voice in “mainstream” U.S. politics. But, remember, Obama is equally a socialist—he just tries to deny it.

PEOPLE WITH THAT YELLOW STUFF IN THEIR TEETH – Why don’t they go the dentist? Or can’t they chisel between their teeth themselves and remove that gook?

PEOPLE WHO DON’T LIKE DOGS – I’ve always found them strange.

MOST GOVERNMENTS IN THE MIDDLE EAST – Let’s start with the fact that they don’t let women drive, make them cover themselves from head-to-toe, and require at least four male witnesses before a man can be convicted of rape.

THE WOMAN WHO FALSELY ACCUSED MIKE TYSON OF RAPE – Did you know that she had once previously – FALSELY – accused a guy of raping her when she was in high school? She admitted to the false accusation. The abusive (or just plain stupid) judge refused to let this fact into evidence at Tyson’s trial. Though this was a long time ago, it is always an act of justice to recognize when someone was wrongfully accused and, in Tyson’s case, also wrongfully convicted of a crime. The man was innocent, but yet spent a few years in prison.

MOST DEMOCRATS – Don’t you people want to live in a prosperous, free world, without discrimination?

THOSE WHO THINK THEY DESERVE GOVERNMENT HANDOUTS – On this day of thanks, let’s thank our hardworking selves, as well as our parents and grandparents (and whoever else) who showed us that personal commitment, effort, strength, dedication and ambition is what leads to success in life. The ultra-liberal, doped-up Obama Administration-Blindly-Guided-Parasites who think they deserve handouts and to be taken care of by us hard-working taxpayers should, in turn, thank us. But I doubt that they will—because they are my ultimate Thanksgiving losers!